July In The Valley 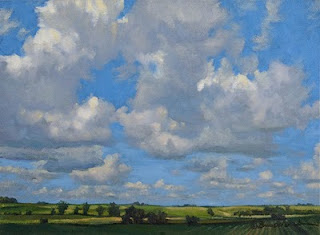 July in the valley...I could really get nostalgic about it.  If there were something to hold you through the winter months, one thing would be July in the valley here.
This afternoon the clouds were just wonderful...why should I sound surprised- they always are!  I was able to do a small plein air study from the yard - looking east across the valley here.  Nothing spectacular like a mountain vista but just as pretty in my eyes.  Just as moving in my mind.  Just as perfect a day as there ever was.  I'm looking at this study as a larger finished painting sometime down the road.
Georgie and I sat out on the studio deck late this afternoon after I had finished painting and she had finished with a day of garden work and weeding...and enjoyed a couple beers...the view...and July in the valley...
at 7:30 PM 2 comments: 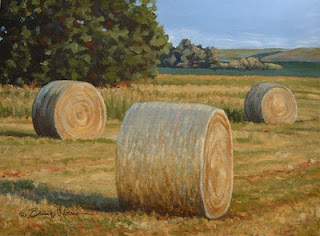 Late Afternoon Bales"
(6X8" oil on mounted canvas)
Ever have one of those days where you almost lose it?  I'm sure we all have...yesterday was my turn I guess.  Near panic struck when it appeared both backup hard drives had gone south on me.  What are the chances of that?  I didn't care to entertain the thought...just kept trouble shooting the studio system until I figured out that apparently my firewire board was toast instead.
Whew...that was close!  But after that I had to backup files via USB...and we're talking Gigs of backup...my whole last 2 weeks of field and studio work.  Long story short, I spent over 10 hours doing nothing but transferring ones and zeros.
When Georgie came home for lunch she knew something was wrong...I don't like talking about the computers because it makes both of us crazy!  After I told her (I hadn't figured the firewire issue out yet), she suggested I just go back to bed or lock myself safely away so I wouldn't destroy anything else...was tempted but knew I had to face the music.  Boy that's a sick feeling!
Happy ending though; all was saved.
After the tribulation was over Georgie mentioned to me that one of the neighbors was baling hay across the road.  Been waiting to see that...bales are a favorite farm subject of mine.
Today was a beautiful day...the short heat spell had broken during the night and the humidity was perfect.  After doing chores and other correspondence on jobs and such I figured it'd be a great day to paint some bales!
A small piece, but you never know - they might come and get them before I finish!!!
Today was more like it. Hope you had a good one as well!
at 9:05 PM 4 comments:

Workin' It and Enjoyin' It 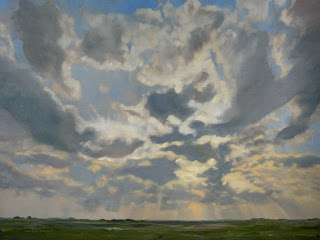 "Late Summer Afternoon"
(12X16" oil on mounted canvas)
There is so much going on out on the prairie these days; keeping up is not realistic but taking advantage of just "some" opportunities here is even tough!
I have been very involved in work on one end of the spectrum...just finished another client's website so was able to put in a little painting time again.  We've had so many amazing skies here the past several weeks and I love painting skies...this "Late Summer Afternoon" painting was one that typically presents itself out west of the "back 80" here, however this time I made up the foreground...the back 80 is in soybeans this summer and just not so interesting visually.  Since this was a plein air study, the foreground was actually put in a few days later back at the studio after some "pondering"; but still done with brief  efficiency of brushwork.
I've been making excursions afield when I'm able and have been back logged with image file processing...I'll post more on the summer prairies in the neighborhood when I get more caught up.
Work it and enjoy it!
at 11:51 AM 4 comments: 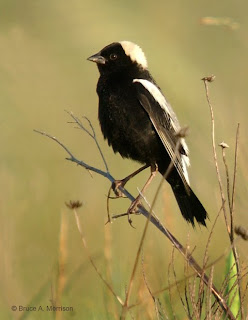 Bobolink - male
(click on images to enlarge)
I've been persuing field material...gathering if-you-will.  Two birds have been playing tag with me this summer; I'd like to do some small studies of them...then perhaps a larger piece of work...painting or drawing.  They've both been here in the pastures this summer - should make it easier huh!  Not.  For some reason these guys move onto the neighboring crop ground where I can't get close to them...private ground too.  So I've been looking on public prairie areas that are larger in size, so they don't feel so squeezed when I'm nearby.  I find birds will eventually get used to your presence if they have some space. 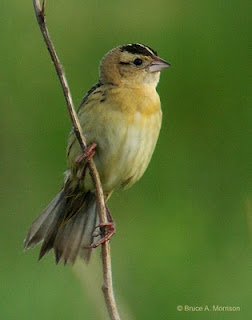 Bobolink - female
The two birds are the Bobolinks and the Dickcissels.  Both are grassland obligates, or birds that require grassland habitat to survive and nest.  Interestingly the Bobolinks are one of the first grassland birds to complete nesting and leave.  They are in the process of doing so right now!
I was photographing on a large prairie area last week and noticed the males were bunching up...one of the first signs that the second phase of their summer was about to begin.  Then I noticed immature birds...young that had fledged (left the nest).  Yup, there they go!
Don't misunderstand, these birds will still be around for a few weeks but not in a predictable manner.  They seem to move from one area to the next for the rest of the summer (kind of nomadic) , and they seldom call and display as they have the past several weeks.  I miss them already! 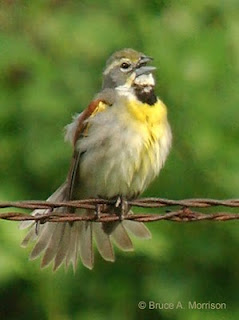 The Dickcissels are still calling here...saying their name and declaring territory or just enjoying themselves!  Dickcissel males are the real singers, the females have an insect like buzz when they're disturbed around the nest or young. 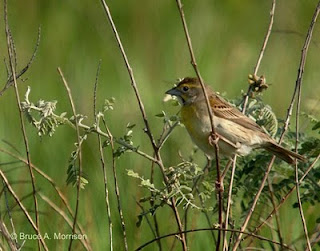 Dickcissel - female
Have some image files to go through but hopefully will find some possibilities I can entertain.  Gathering images and material is fun, now comes the hard part!
at 6:45 PM No comments: