Went to pick raspberries here this afternoon and the birds were just flushing out of the patch everywhere; don't mind sharing, and besides, many were there for the bugs not the berries. If you read the previous blog - yes - the raspberries "sorta" survived the early frost we had a week or so back.

The usual fare of Catbirds and Brown Thrashers were there enjoying the berries, but we had our first Harris Sparrows of the fall there as well...counted nearly a dozen. 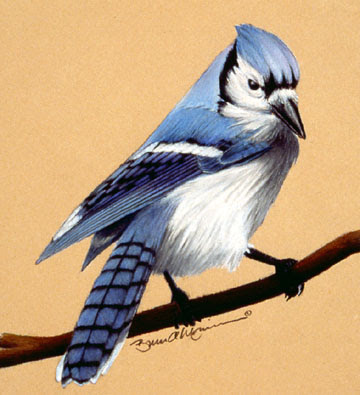 Blue Jay
(prismacolor on board)

The big surprise was the Blue Jay population had suddenly become overwhelming. We usually have 15-30 birds at a time in the Fall but we knew we had at least twice as many, maybe more. Then while berry picking, the Blue Jays began to pass by in droves...we lost count around "80" and still had birds in the yard!

Soon a Sharpie (Sharp-shinned Hawk) showed up cruising the grove and the yard got quieter for awhile...except in the berry patch where the Catbirds were still having lunch.

A question came to mind as the Blue Jays passed through "If a flock of Crows is a 'Murder', what is a flock of noisy Blue Jays? A "Riot" or a "Rumble" might work...

I've actually updated this post and changed the title, as I was shown a site that gives the names for bird "groups" http://www.birdnature.com/groupnames.html ...a group of Blue Jays is actually called a "Band" or a "Party".

Well they seemed to be having one (party) so I guess it's fitting !

Morning Frost on the Prairie


Well the raspberry patch at Prairie Hill Farm Studio may be done a couple weeks earlier then we're used to; had a good frost this morning. Guess it's down to rationing to get us through the winter!

I was hoping to photograph more Monarchs in the prairie here before it came to this, maybe we can still draw some butterflies migrating through from Minnesota and Ontario? 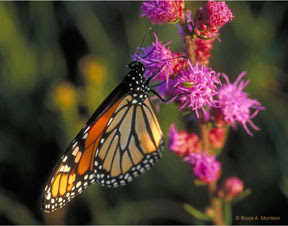 Early morning photography on the tallgrass in the late summer or fall is an elixir for the soul; occasionally the colors and subject matter come together as if there were no better time.

The Monarch Butterflies love Liatris and the L. aspera (Rough Blazing Star) is one of the last ones to really hang on well to the prairie remnant hillside here.

I've always felt isolating the background with closeup subjects like this is the best way to present them. It means a much shallower depth of field than you might like for the main subject (in this case - the Monarch and the Liatris) but trying to keep the film plane as parallel to that subject as possible, helps minimize that drawback. Keeping the butterfly's head and eyes in focus is probably the most critical issue...our visual process will tend to treat it as "in focus" if you do.

I'm going to hold out for the warm weather next week to bring more Monarchs visitors; hopefully I'll be here when they show up!