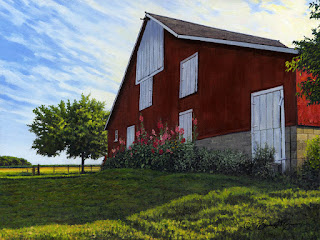 "The Old Stucco Barn"
oil painting  - © Bruce A. Morrison
(click on image for a larger view)
Well the big event a couple weekends back is over and I'm still in recovery mode!  It was a successful two days and I'm extremely grateful for that.  Thank you to all who came to visit - we appreciated seeing you and hope you enjoyed your day on the Artisans Road Trip!
I had this painting on my easel during A.R.T. - just waiting for some final adjustments and finishing touches...I'd hoped to have it completed by then but the event preparations took up quite a bit of time;  it was close to its final stage though and it was fun to let visitors see it fresh.
The painting is of our stuccoed barn just 30 feet from the studio.  We believe the barn is the only stuccoed barn in the county, but can't be 100% sure.  It was built in the early 1900's but added on to at least a couple times since then.  It was stuccoed sometime in the mid to late 1940's...all this information is garnered from local residents/farmers that knew something about the previous owners and occupants here.
As you can see from the angle of the image in the painting, the foundation of the building was reinforced with concrete block at one point - we think that was completed when the stucco work was done - from what the last owner said and the other sources of information, the block was there sometime before 1950.  One other interesting feature that can't be seen in the painting are two flying buttress type concrete elements were added at the time the block was laid.  I don't think you see that very often but don't believe its not totally uncommon with old barns.
We like barns and they are a disappearing element in the rural landscape now...too many are being razed and replaced by pole buildings; its very sad.  I do understand the economics of keeping/restoring a barn though...it is daunting.  So far we are spending time each summer patching roofs and keeping the critters out as best we can (except for the Barn Swallows of course!).  Both the barn and our crib have suffered from racoon and woodchuck damage since we've been here.
I've wanted to do a painting of the barn since we moved here years ago and actually started one or two but wasn't quite satisfied with their direction.  This angle is more up close and backlit...I think this perspective gives it a bit more drama, plus the main subject is nearly in total shade - creating a totally different feel to the barn.  We let the Hollyhocks and other flowers just take over where they want along both sides of the barn and I wanted to include them...they virtually block all the entrances on the east side in mid summer!
As I type I'm aware that I have to get back up on the south side of the barn roof and pick up where I left off last spring with replacing cedar shakes...also have the crib cupola needing patching...these are all chores that are hard to put aside if the building is important to the integrity or aesthetics of the place, and I really feel they are.  We'll keep trying to give a few extra years to them until we no longer are able or have departed for other adventures.
Next time you're out in the country, give those neat old buildings another look; they are part of our rural and agricultural heritage!
at 1:56 PM No comments: 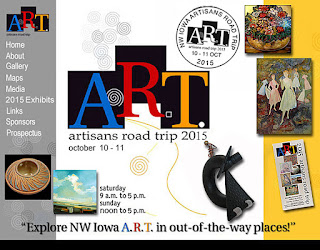 This is the big weekend!


Not one, but three venues!
Northwest Iowa's Artisans Road Trip members invite you to attend the 12th annual open studio tour on Saturday, October 10th from 9 a.m. to 5 p.m. and Sunday, October 11th from noon until 5 p.m.

Along with the open studio tour, everyone is encouraged to see and purchase original art at the two collective (group) shows sponsored by Arts on Grand and Pearson Lakes Art Center. "There will be one or two pieces from almost all of the artists," explains chairperson, Tim McIlrath.  It's impressive to see the range, quality and diversity of each artist's work and as a collective group."
Events and Dates: Artisans Road Trip's Open Studio Tour: October 10 – 11, 2015               Arts On Grand, Spencer IA: September 29 to October 31, 2015
Pearson Lakes Art Center, Spirit Lake IA: October 8 to December 31, 2015

"Planning your personal A.R.T. tour is easy."
To learn all about the 2015 Artisans Road Trip, preview artists' work and begin planning your personal tour we encourage you to use these tools:
1. BROCHURE: You can find brochures at local art centers, participating artist locations, banks, libraries and gathering places in your community.
2. WEBSITE: www.artisansroadtrip.com
3. BLOG: http://artisansroadtrip.blogspot.com/

"We're looking forward to seeing you this year!"

BRUCE MORRISON, painter/photographer: "I love it when people come to my studio, see what I do and ask questions – I learn a lot from this exchange!  And people learn something too, in a fun way. I believe (that) the interchange between the artist and public fuels the act of creativity. The biggest barrier to any artist is the issue of 'exposure'.  A.R.T. gives the artist a venue for interaction and the potential for the purchase of the work. It also opens the world of 'creativity' to the public.

LINDA FRIES, watercolorist: "Oh, the freedom and flow of watercolor and just as the brush takes control; the painter begins a journey and that's when the fun begins. For years now, A.R.T. has opened our home studio to the fun bunch that just stops in. And I so enjoy meeting all of these outstanding artists. Each year is richer, better – It's a good time."

HANK HALL, pottery, drawings, painting: "Sharing my work with the public is something I love to do," says Hank Hall. "I create to satisfy my sense of aesthetics, and if someone else gets a kick out it then it just doesn't get better than that!"

And that's just a few words from three of the 35 artists participating in this year's big weekend event! The weekend forecast is for plenty of sunshine and above normal temperatures for October - plan a weekend trip and make the rounds at the 2015 Artisans Road Trip!

Of Course I am just a bit prejudiced as far as my studio and location is concerned! Plus we've gotten a reputation for the best "treats" of the road trip too.  Be sure and stop by and see what work is in progress and what's new! There's really something for everyone here - even the view is great!

Hope to see you on the road for a fun weekend!