Happy Winter Solstice and a Very Merry and Blessed Christmas! 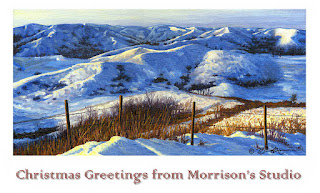 Wishing everyone out there a great winter ahead and a Very Merry and Blessed Christmas to you and All those you Love!

See you next year!!! 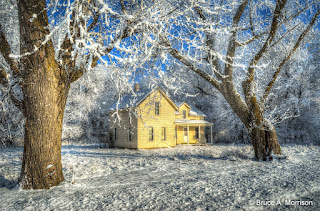 I've been trying my best to keep up...to stay on target, but life is a bit more complicated than all that; I just have to quit fighting the tide and go with it sometimes I think.

Our winter finally began...first with a full night of rain, then turning to snow.  Made for terrible driving but also a good reason to stay put and do some work in the house.

I caught a bug from somewhere - haven't the slightest idea where, but it took the wind out of my sails...still trying to hoist them back up.  Woke up yesterday to the results of an overnight freezing fog...it was spectacular!  Around 10:30 in the morning the sun started cutting through and the time was now or never so I grabbed the camera and went for a short visit in the "neighborhood" to see what views might be found.

I thought of the wonderful little gem of a summer place, one the owner used to spend summers at in his old age...he'd then slip off to one of his children's to spend his winters.  Its sold now...I don't know who owns it but I still refer to it as Don's old place.   When I arrived the sun was already dropping the frost from the trees...not that it's melting but that the air currents are starting to become active and the breeze is tipping the heavy ice crystals from their delicate balancing act. 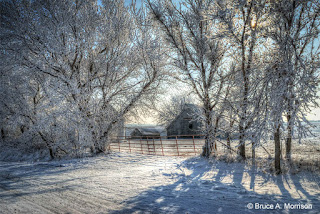 "Frosty Morning at the old Farmstead"
photograph - © Bruce A. Morrison

It was a beautiful setting but becoming quickly undone!  I tried not to spend too much time taking it in and recording it as best I could instead.  I then drove down the road a bit to a nice old farmstead and turned around as a bridge down the road had been wiped out by last September's epic flood in the valley.  The long early morning shadows at the farmstead's gate were wonderful and they were the last strong holdouts on frost that morning.

By the time I arrived back to the acreage, the frost was all on the ground and the moment was over.  It was a beautiful 45 minutes, not just a visual memory. And now back to the business of the day...trying our best.
at 10:02 AM No comments: