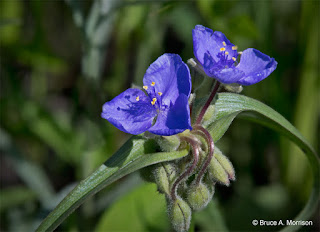 June has been more akin to July or August I think...not necessarily humid but definitely hot and dry for us.  This has kept us fairly busy on the acreage.  We don't have working wells and the gardens are both a fair distance from the house...our early mornings are spent hauling buckets of water in a little wagon behind an old mower that still "moves" but that's about the extent of it!  Ha!  Hey, everyone makes due with what they've got , right? 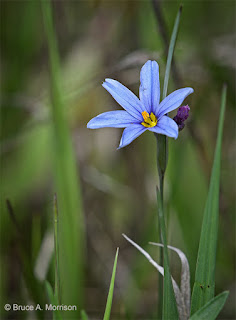 The pastures got a boost a couple weeks back with some badly needed rain but we've about tapped that out now...I'm waiting to see if we have a repeat of last summer and things go dormant once more.  In the meantime though we've had some nice forbs and grasses return, and some even showing some good signs of spreading some. 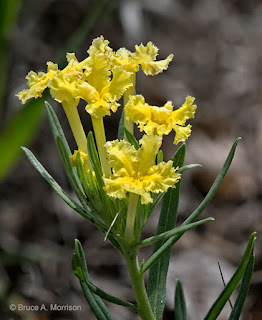 Fringed Puccoon (Lithospermum incisum)
photograph - © Bruce A. Morrison
Every year the Fringed Puccoon seems to move some distance...I suspect ants help the cause...however it has shown up on the south pasture now!  I suppose it may have always been there, but with the sheep grazing so closely there 15 years back, they may have just barely survived and are now attempting to recover?  Or perhaps birds moved it?  I'm sure it's seed would be a perfectly fine meal! 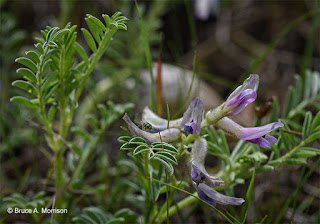 Our north slope on the gravel hillside has a small compliment of Ground Plum...I get a kick out of some other common names like "Buffalo Plum" or "Buffalo Berry"...either way its a forb I've run into on other hillsides and pastures in the area...the rabbits and deer in an isolated location like this (small acreage surrounded by mostly crop ground) can decimate or even eliminate tempting tid bits like the Ground Plum...I also find voles a real issue when the resource is so limited!  Last spring I cut some hardware cloth and tried placing some small barriers around these to help dissuade the constant pruning.  This spring I was surprised how well they responded...more robust branching has so far escaped becoming a rodent salad bar. 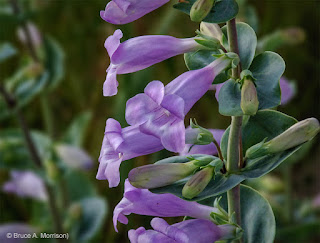 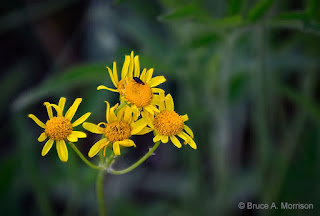 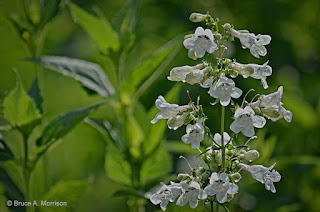 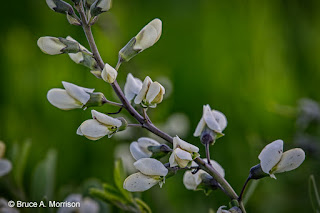 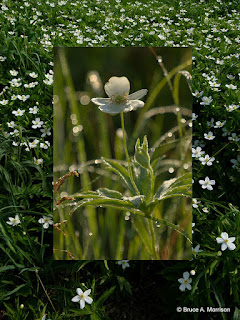 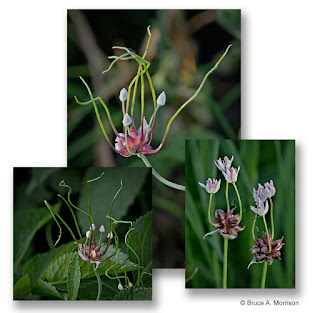 Many, many others have had a good showing...including the Prairie Garlic (Allium canadense)...I first noticed this allium back in 2012...in the NE corner of the north pasture...had always seen the Prairie Onions (Allium stellatum) here in the fall but this one was a surprise bonus.  This allium has since appeared in several other location - all are on the lower mesic ground - likely the preferred soil type.  The Prairie Onion is always on the gravel hillside - haven't seen it mix with this allium. 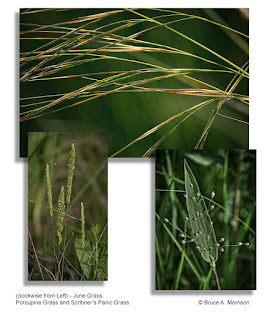 Prairie Grasses of June
photograph - © Bruce A. Morrison
(click on image for a larger view)

The warm season native grasses are back and showing well...as I type this I'm thinking I've forgotten to look for the Western Wheat Grass, which we do have a small stand...shame on me!  Oh well.  I did manage photos of the June Grass, Porcupine Grass and the Scribner's Panic Grass.

I admit I'm the reason we have so much Porcupine Grass in the north pasture.  I was finding it in the ditches adjacent to the acreage but hadn't seen it in our pastures...thought it odd.  One June, when I noticed the Porcupine going to seed I picked a few and dispersed them here and there...they immediately took - had them showing up the very next year.  Now I pick from the pasture and try and seed the ditch cuts made by the county back in 2008 - a major source of erosion that the county created on their own, much to our disgust!  I keep trying to introduce things that can get a foothold there and hopefully its helping.

We've had a week straight of mid to high 90's and this morning as I'm writing, it tried to rain...rather paltry amount - maybe a couple 100ths of an inch.  Pretty nasty winds too though; hope we don't have chain saw work ahead of us!  That's never good.

With today our last chance of rain for the next week or two, I guess we'll be hauling water to the garden and a few select trees this afternoon.  But there'll be a slight reprieve in the temperature today and maybe tomorrow before were back into the oven.  Grateful for those small blessings!

I'll insert a small plug for something I believe is worth your time.  It is something that we all must wake up to and seriously give thought to.  We should all be more proactive than most of us have been (myself included) when it comes to our home planet.  It's the only one we have, why are we treating it like its not?!  I watched a good program a couple days back.  It's the latest film produced by David Attenborough (and likely the "last" film he will do - he's 93 after all!) "A Life on Our Planet".

This is a MUST watch and listen. We've over stepped the climate/biodiversity/deforestation boundary - are we listening? Or should we say "Who's Listening"? Attenborough is not trying to make us feel better, but to shake us from our complacency. Do we want to hang onto our personal "life styles", or close our eyes to what we're doing? Are we growing numb to the mantra that science has been trying to impress upon us? There is a chance...but will we embrace it...there is a chance. Are we listening?  Try and give "A Life on Our Planet" a watch...it is not a waste of time.

Have a good Summer ahead and be good to one another!