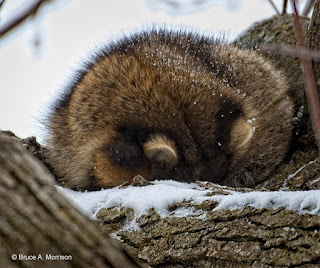 Raccoon napping in the crotch of a tree
photograph - © Bruce A. Morrison

It's February and I guess that's a good thing right?  Closer to Spring!!!  I don't mind February so much...its the shortest month of the winter and still looks like winter.  Now March looks like a mixed up month!  Sometimes like winter...sometimes like spring - usually all goofed up and a sloppy mess!

Had a Big old Raccoon in the gate tree this a.m. When Georgie first spotted it, it was rolled up in a ball on a fork in the tree but with the snow turning to a freezing mist it decided to try a nearby hole. The hole it tried hiding in was apparently too small as it kept coming back out to reposition itself...kept hiding when I'd take the camera outside but later showed up napping in another crotch outside.

I know it knows I'm there trying to take its picture, but I just settle for a nap shot and head back inside...hoping it'll stir for the camera yet... 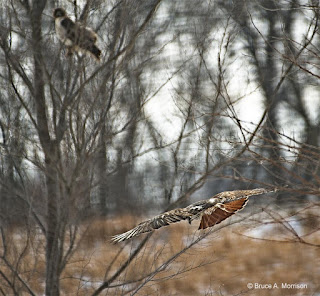 February is a time when many birds of prey begin getting serious...seems early but the Great Horned Owls already have eggs they're sitting on and the Bald Eagles are setting up shop too.  Another local favorite of ours - the Red-tailed Hawks, have been known to set up nesting late in the winter...we had a pair here hunting together behind the barn.  Sometimes one bird would sit and watch while the other dipped around in the pasture trying to stir something up and other times they'd fly together and swoop into the grasses...don't know what they had going there?   Maybe a rabbit sitting tight or a mouse...who knows? 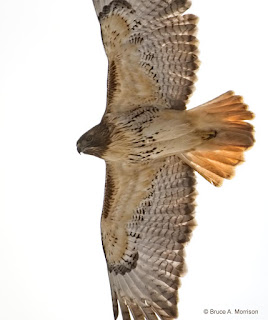 
Its fun watching things begin to stir since the frigid air has left its mark everywhere...kind of has me stirring myself!