Freezing/Thawing...Once in a Blue Moon

If memory serves me, the past couple years lacked some of my favorite days of the season...Indian Summer.  This year has tried making up for it and hasn't done too bad of a job. Although we've had 3 snowfalls this season already, they've been fairly light and melted in short order...just the past several days have been in the 60's and 50's and quite pleasant for late November!

Really I haven't relished this Fall too much, I won't get into it, just say I'd as soon forget it...in fact most of us would just as soon forget the entire year!  Its been tough on some folks more so than others.

I will admit I have been having a good deal of trouble motivating myself, like many, many have I'm sure.  But I have had a few bright spots appear here and there this year...so thankful for Georgie and the kids, and good friends who think of me and lift my spirits.  I know I am blessed and am grateful.

Studio work has been slow, but I keep on plodding away with small jobs and also work on the acreage...the chain saw has been busy off and on, a little seed collection from the pastures and some patching of the barn and crib roofs have also kept us busy.  Drawing, printing and some framing occupying each day now, tis the season😊.

Recently some friends called and let me know they had some River Otters out by their place and welcomed me to come out and try and get some photos.  I went early last Tuesday morning and found them, as if they were waiting for me!  Its been some time since I've seen Otters...they've been in the pasture out in front of us, along the creek...have seen them in the Little Sioux River a number of times, and even up north years ago.
When I approached the water, I was hearing the familiar sound of the ice "pinging" and breaching...a noise I remember from times when something large was swimming close to the underside of newly formed thin ice.  And there they were!  First one, then another... 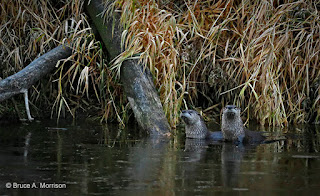 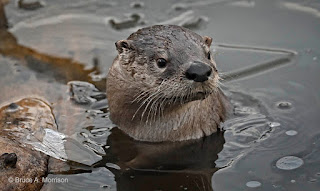 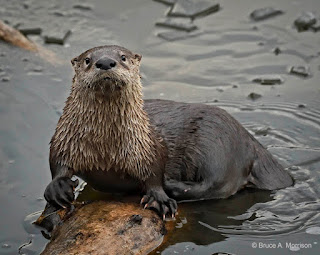 (photographs -  ©Bruce A. Morrison)
At first they watched me with curiosity from a distance, eventually popping up through the thin ice by butting it from underneath with their heads...eventually right in front of me - then crawling out on a small log to get a better look...what fun! 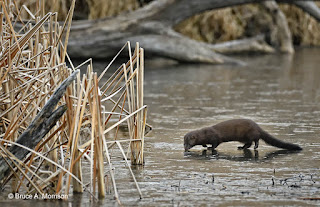 Mink walking on the ice through the rushes.
(photograph -  ©Bruce A. Morrison)
I got an extra bonus while waiting for more photo ops - a Mink was walking around on the ice and one of the Otters would pop up through the thin ice around it and the startled Mink would jump up into the air - so funny to see!  This went on for maybe 10 minutes but kept taking place behind a bunch of rushes out of view of the camera...was like they were playing a game!
The trip to photograph Otter really made my week...between critters and great weather, its been fun.  A lot to be thankful for out there - even in rough times.
Be good to one another - Happy Thanksgiving!!!
at 3:56 PM No comments: