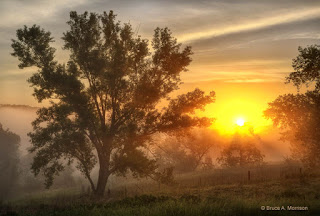 What a drop dead Father's Day morning it was!  Really beginning to actually feel like June now...about time - the month's half over!

I originally went out to photograph the Little Sioux River Valley in the fog that lays over the river like a thick blanket this time of the year, but it stayed socked-in for a good 2 hours as the sun rose and I could not find openings for shooting.

After photographing the sun breaking through the horizon (image above), I walked over to the hilltop at the Prairie Heritage Center and checked out the small Bison herd there to see if there were any photo opportunities there.  The Bison were pretty obscured too but I kept waiting to see if they'd ever emerge.

Breaking Sky On The Tallgrass
photograph © Bruce A. Morrison
(click on image for a larger view)

Eventually the sky did open above the Bison, and even though there was a patchy haze over the ground, I decided to give it a try and made  a series of images that worked fairly well...the Bison were still a bit hazed over but the feel of the ground and background fog with the great swirling sky cloud pattern had a nice feel to it.  I think the only thing that'd make this a "dream" image would have been about 50-60 more Bison!

A nicer day couldn't have been asked for...well, the mosquitoes were rather ravenous but nothing good bug netting and gloves and hooded sweatshirt couldn't cure :)   OK, things could always be better but I'm not complaining, looking back on the morning.

Hope your day was good...here's to our Fathers...still with us and departed.  God Bless 'em! 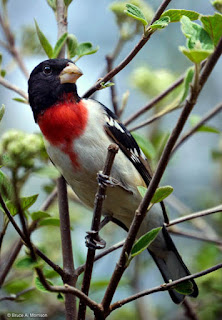 Spring is nearing its end and the work is mounting here! I am always pulled in many directions at this time of the year; need to get out and photograph the landscape, need to stay in and finish artwork on the easel, need to pick up work from a closing exhibit and take work to a new one, need to get work framed for customers, get new prints processed and hung in the studio...even finish patching the barn roof! The list goes on; like all of us - too much to do after that long winter and wet/cold spring!
The photograph above is part of another exhibit I'm participating in at the moment. This new art exhibit is at the Witter Gallery in Storm Lake, Iowa and runs through most of the month of June.
This exhibit is the first Artisans Road Trip showing for the 2013 season - the tenth year of the Artisans Road Trip in NW Iowa! You may recognize the A.R.T. open studio tour held each fall during the first weekend in October; the Artisans Road Trip also puts on exhibits during the year with current artist members and the Witter Gallery showing is the first of the 2013 A.R.T. season!

I have 4 pieces in the exhibit - 3 photographs and 1 oil pastel. But there is so much more to see as well. There will be an artist's reception Thursday - June 13th, from 5 - 7p.m. Hope to see you there! 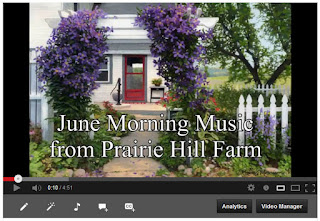 Here's a playful respite for all of you out there under the pressure of work that is never quite finished or caught up. The Image above is from the house here and our kitchen home entry and garden...it is from a color pencil drawing done a year or so ago. I have used it here as artwork to go with some of nature's music here on the acreage.
I do occasional video and audio work for my own use and for some natural resources client projects on contract. This short "get away" is just for myself and my friends. Just click HERE or on the image above and listen to late spring out on the prairie. Enjoy!

Hope you enjoy the rest of spring!