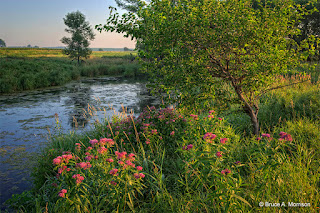 August has arrived...it should still be June as far as I'm concerned but then what I think won't change things so that's that.  I am looking forward to some time...maybe by mid Autumn, that my time will not be tied to deadlines so much and I can once again slow down...take a guiltless nap every once and a while...just stroll around the pasture or down the road with no goal in mind - just chill out and relax.  Boy that actually sounds good!

In the mean time I'm still prepping for a solo showing in early October at the Pearson's Lakes Art Center in Okoboji, Iowa...I'll throw out more information closer to the date though.

I've been really struggling with a landscape here in the studio that did a number on me...but I haven't removed it from the easel yet...maybe I haven't given up on it yet?  That happens; I'm sure I'm not the only person that has run into this dilemma and it won't be my last either I know. 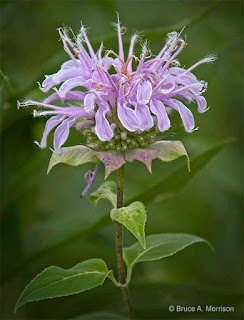 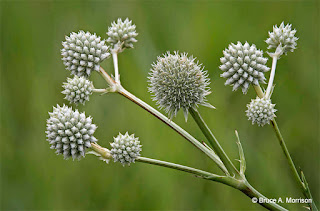 
One thing comes about out here when August rolls around - things are visibly transitioning.  The early to mid summer flowers are finishing up...the Compass plants and Cup Plants are all in flower and maturing, goldenrods are starting to bloom, the liatris are beginning to move along too, the prairie clovers are about done, and the warm season grasses are in flower or early stages of putting on seed.  It's still mid summer (I don't want to rush things) and the prairie is "Pollinator Heaven" right now...and of course the hotter it gets out there - the happier the pollinators seem to be! 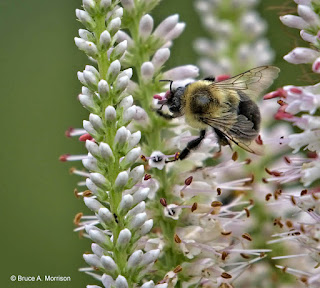 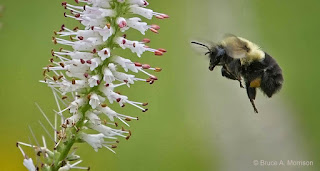 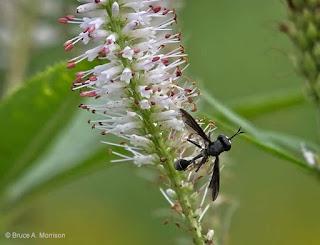 A member of the Bacchini sub-family
of Hover Flies (family Syrphidae)
photograph - © Bruce A. Morrison 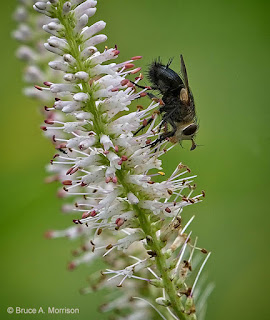 A member of the Hover Flies family (Syrphidae)
photograph - © Bruce A. Morrison 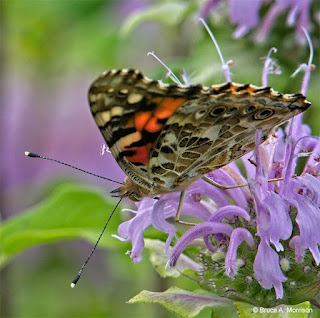 The Culver's Root here was a big hit one evening down on the pasture...we had lost a good clump to the new septic fields we had installed but thankfully there are still enough to go around here.  We had everything from wasps to Bumble Bees to all kinds of Hover Flies...many of which are quite different looking! 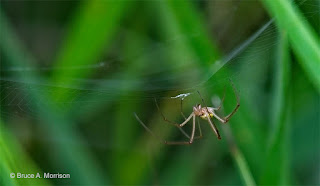 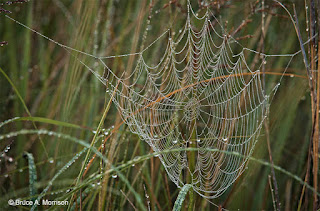 When you have a lot of pollinators out and about you also get some predator activity, and August is a particularly good time to see all types of spiders out working their webs - especially great to see in the early morning dew. 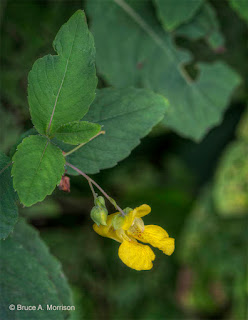 We also have a couple mid summer woodland types of native flowers blooming here in the north grove right now.  One plant I've seen repeatedly each summer and never caught it in bloom is really putting on a good show right now, and certainly welcomed by the local pair of Ruby-throated Hummingbirds nesting in the yard!  They are commonly referred to as "Jewel Weed"; the type we have here are the Pale Touch-Me-Not - a fun plant to show kids when the seed's ready to disperse!  Just touch a ripe seed pod and "POP" the sheath snaps open and the seed goes flying! This is a fun plant to collect seed from. 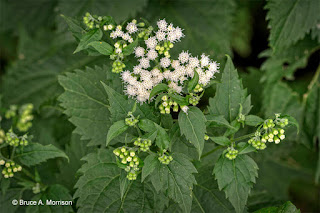 Our other mid summer woodland bloomer is the White Snakeroot (Ageratina altissima), a fairly common plant even in disturbed areas...which doesn't surprise me seeing it in the old grove remnant here. Its a great plant for pollinators and lasts well into Fall.

I hope to get out more, not fuss so much about what's taunting me on the easel, and enjoy what summer we still have to enjoy...the bugs aren't so bad right now too so what better reason to get out there!

Thank you for stopping by and visiting the blog - be sure and click on any of the photos for a larger view - Have a Great Summer!!!
at 2:22 PM No comments: