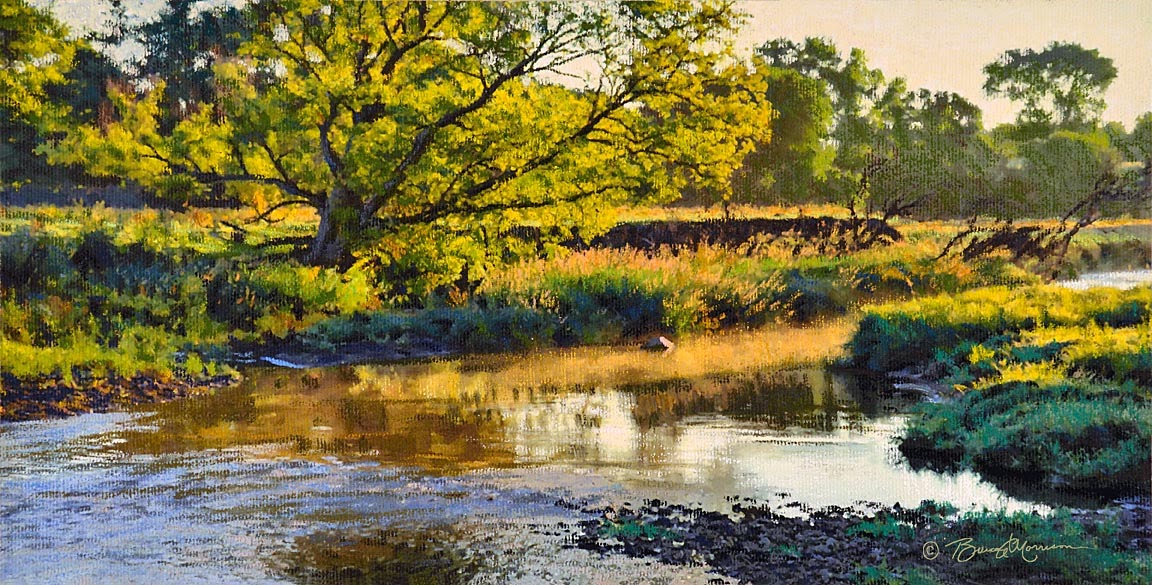 I just deviated a "tad" from working on the "From the Tallgrass" exhibit this coming summer at Neal Smith NWR, by doing a small (6X12") oil pastel and oil pencil study of the creek down below us here in the valley.
I had been searching for "prairie" material while viewing years of video footage I've taken and came across this wonderful section of the Waterman Creek about a mile and a half south of us and was immediately taken with it.  I have found so many things in the past that have interested me as material for future paintings or drawings, and a familiar thing always seems to happen - I either lose interest or grow less "smitten", or even forget!

I am not an organized person...OK, maybe too much information, but everyone has their short-comings...that's at least one of mine.  I've always relied on my memory and its just not holding up as I pile on new thoughts!  The old "hard drive" is finding a need to delete information as more is downloaded!  That's about as concise as I can put it!

But when I saw this footage from 2012, I really was smitten - I knew it had to be squeezed in NOW, or be deleted or forgotten from memory someday.  So as soon as I finished my last drawing (Big Bluestem, color pencil) I started this sketch immediately.

I really want to do a larger oil painting of this scene, now that I see how well this study works for me.  I hope I do not lose interest (another short-coming 'ADD' perhaps?) and never get back to trying a larger studio piece; but I can't think about that now - Too Much To Do!!! 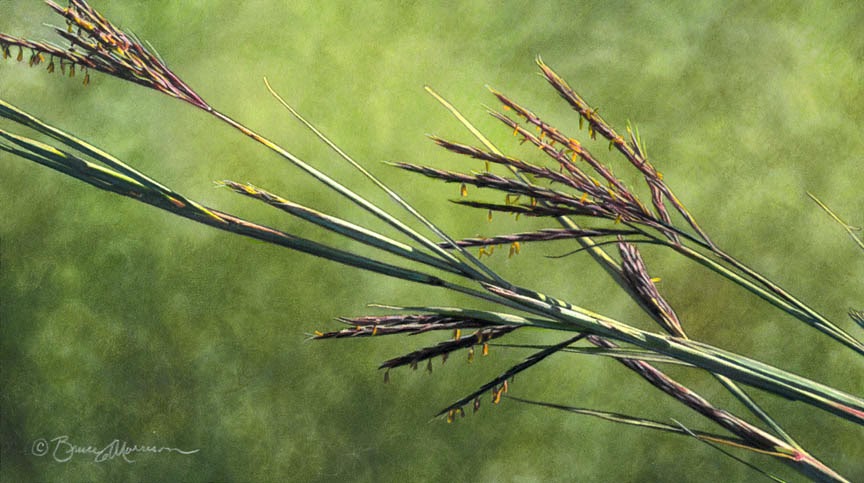 I've never drawn grasses before, except "implied" as a background form or shape.  And since this summer's solo exhibit will be at a national "Tallgrass Prairie" type refuge, I thought it'd be very appropriate to try to do some small studies of prairie grasses as well.

Of course Big Bluestem is the Tallgrass icon for grasses, so what better subject to start with!?  I am drawing many of these small studies as "close-up" drawings; to bring the subject matter into a more personal/true experience type of presentation.  The grasses depicted here were in "bloom", which is actually surprising to some people; many do not equate grass with having flowers...sometimes referred to as "florets".  Bloom time is usually around early to late July here, depending on the season's conditions.

This drawing was done from some video footage taken here on our native pasture in 2011.  When I started working on this summer's solo exhibit I garnered many images from the video work I've been doing over the past several years...they came in handy for reference material "and" inspiration, during this past winter!

Spring continues to make inroads here at the studio...rather chilly and breezy today but the yard is full of Red-wing Blackbirds and Robins...and the Great Blue Herons have just started showing up at the rookery across the valley!

Well, back to work here - have a great week out there! 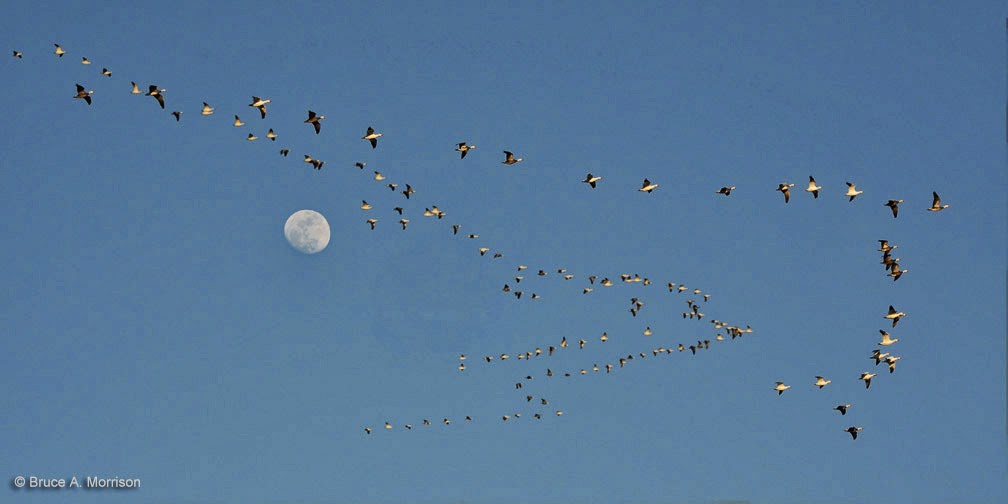 Snow geese and the Gibbous Phase Moon
photograph - © Bruce A. Morrison
(click on image for a larger view)

It can be a crazy time of the year, March.  One day is very hopeful for spring thaw and another blankets the ground again.  So it is each year, and this morning was no different when the landscape looked like winter once more, yet this afternoon the landscape's a blank canvas again and sunny.

The thing I like best about March is the sudden movement of the wildlife, with new species appearing, and - the sounds!

Last week it was difficult getting any work done for a couple days.  Every time I'd get in the middle of something, Georgie might show up and say "Have you looked outside"?  I'd stop what I was doing and go out to see clouds of Snow Geese moving through...it was really a fun sight.  Other times during those days, I'd actually hear the geese as they flew lower and over the studio.

The deer herd has shown its true numbers during the afternoon hours the past 3 weeks too.  Each winter, after the deer season has ended, some time seems to need to pass before we can get a good idea of what the spring population will look like.  They all seem so comfortable with daylight again, now that its been some time since the shooting stopped!  It looks like we'd better keep the fencing around the smaller trees in the yard for a few more weeks...each day we have a skiff of snow, we see deer tracks all over the yard...next to the house and studio.  Our pussy willow has become a salad bar again; we don't keep it corralled - the pruning doesn't seem to bother that bush too much.

The Robins are back, and the Juncos have returned on their trip north too.  The male Goldfinches are starting to show their molt to bright yellow, and the Cedar Waxwings are taunting me from the bushes each morning I come out...I say "taunting" because they seem to make a game of keeping their distance when I appear with my camera.

Tomorrow is the vernal equinox...the first day of spring, but next week sounds like we'll be getting chilled down a little again.   Its like a seesaw, and like that seesaw was as a kid, its fun! 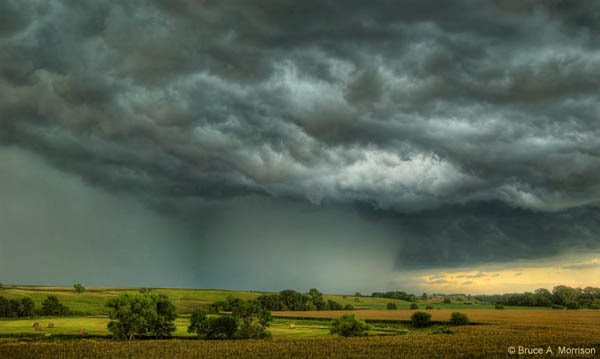 "Valley Storm"
photograph - © Bruce A. Morrison
(click on image for a larger view)

Its nice thinking about weather that isn't necessarily "winter" for a change!  And the new exhibit at Arts on Grand in Spencer, Iowa is full of all kinds of weather - stormy weather, fair weather, warm weather, winter weather, rainfall, fog, snow..."Weather Permitting" an exhibition of "weather"! 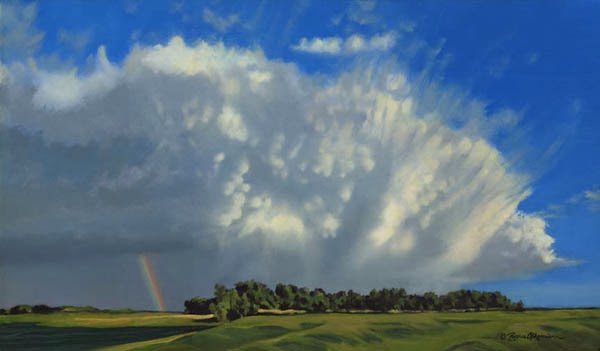 "June Rains Past"
oil painting - © Bruce A. Morrison
(click on image for a larger view)


I have 5 pieces of work juried into the "Weather Permitting" exhibit  (the two here are a sampling of those) and was able to view the showing yesterday afternoon - it is an excellent mix of artists, mediums, and weather!  A fun "must see" exhibit!

"Weather Permitting" runs from March 4 through April 5th, with a reception on March 13th (5 - 7 p.m.) at Arts on Grand in Spencer.  If you're in the Spencer area during the next few weeks, be sure and stop in Arts on Grand for a fun day of "weather"! 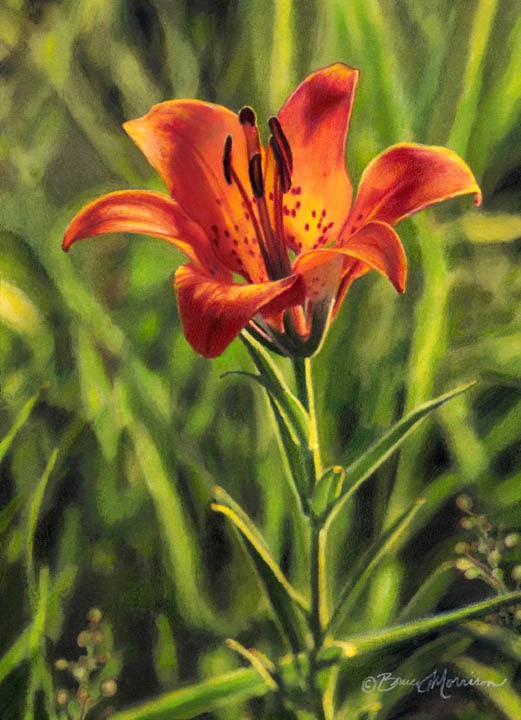 "Prairie Lily"
(Lilium philadelphicum)
color pencil drawing - © Bruce A. Morrison
(click on image for a larger view)
Still waiting in the wings for spring!  Aren't we all?!  But there is hope in the air with predictions of day time highs above freezing toward the end of the week!
A year ago we were only days away from seeing our Great Blue Herons returning to the rookery across the valley and were seeing the area Bald Eagles sitting tight on their nest.   The Great Horned Owls are apparently incubating/hatching nearby...we see the top of the "sitter's" head when we pass by and crane our necks.  And the numbers of Mourning Doves is stretching a bit here on the acreage...we haven't seen huge flocks of Red-wing Blackbirds yet but a few individuals have been on the feeders in the yard.
But I've been working on early summer on the drawing board; another prairie forb (wildflower) has grown to fruition.  I chose a lily that is native to my county (O'Brien) and still exists in a state remnant nearby.  I won't disclose its location as there are a meager few left and I don't want them stressed any more than they already are.
I first came upon "Lilium philadelphicum" on the north shore of Lake Superior and in the adjacent forests, where it is locally known as the "Wood Lily".  I was quite surprised to find this beautiful small lily back in the mid 1990's here in O'Brien County when the state acquired a wonderful native prairie remnant; we walked the remnant the year prior to its public disclosure and found the "Wood" Lily on the prairie there!  I discovered the "Lilium philadelphicum" was one and the same as on NE Minnesota's "Arrowhead" region, and was pleased to call it "Prairie Lily" for the first time!

I drew this color pencil drawing from that very same "first" Prairie Lily here...from a slide I took of the plant in bloom that morning of discovery. Hmmm, "slides", that's something I haven't worked from in a long while!

Its been cathartic doing these prairie plant drawings, getting that winter "thing" purged from my system!  I do hope to do more when I can.

I have an exhibit on the prairie coming up in July-August this summer, down at the Neal Smith National Wildlife Refuge near Prairie City, Iowa.  Neal Smith has a large and quite nice visitor center and the exhibit will be at the J. N. "Ding" Darling Gallery there.  The exhibit will follow my past "From the Tallgrass" theme, relating wholly to the Tallgrass Prairie.  I'll follow up more in a future blog on the details.

Still waiting and trying to be patient!