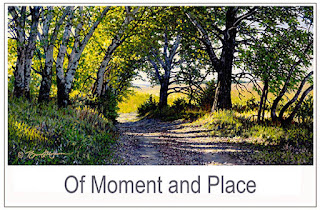 And what have I been up to? Getting ready for a solo exhibit in 2 1/2 weeks! Actually I promised this show about 2 years ago...so its been a long haul. After promising the show, a time had to be scheduled and its surprising how far ahead these exhibits are planned! Regardless of all that - the time is drawing near and I'm still frantically framing and cataloging and labeling things here!


The Pearson Lakes Art Center will be hosting the exhibit from October 3 through January 4th. The exhibit will consist of paintings, drawings and photography and I've treated this show a bit differently, at least in my head. As far as paintings, I'm breaking these up into plein air works, studio paintings and commissioned work...some of all these never before exhibited outside my home and some from private collections of clients that have been gracious enough to loan these for this exhibit. Aside from commissioned pieces, the paintings, drawings and photographs relate to my personal interests...birds, the tallgrass prairie and to the landscape.

Oddly enough and unbeknown to many, it was "Birds" that were responsible for my beginnings in photography, drawing and painting. Many years ago I posted a blog on "where it all started"...I'll leave a link if anyone's interested. I guess we all had to start somewhere.

Its my hope the exhibit "Of Moment and Place" will give life to the things that have been my path for the past 50-60 years.

This has been a very long time in coming - hope to see you there! 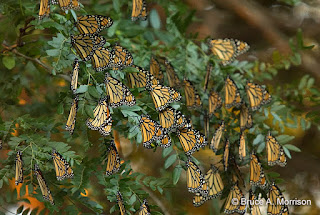 The roosting has begun - they are on the move!  Actually its been a few days now, just getting the time to get around to reporting it.  But WOW we're having a fun time here with the show in the pasture each day and in the yard in the evening and morning! 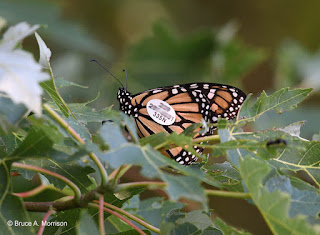 (I partially blurred the number so our Florida
friend wouldn't get too many phone calls!)
This morning we had a "late" roost...they're usually out and dispersed/feeding by mid morning but today they were still roosting and clustering here and there out of the brisk wind.  It was 10:50 am when Georgie came and got me to look, as she'd been out doing chores and was seeing lots of action.

I brought the camera out and was watching all the roosts and amazed they hadn't dispersed when I saw a tag!  I photographed this on one of the soft maples on the north side of our grove, out of the wind...just sitting and resting.  And no wonder!

I don't want to name the person without his permission but he has been doing research on Monarchs for the past 10 years and started his research in Florida.  Florida Monarchs are unique in that they don't migrate - they are a resident population.  There is a parasite that Florida Monarchs are experiencing and they have been tagging these Monarchs and taking small samples from their abdomens (doesn't harm them) to check for the parasite...he referred to it as the "OE" parasite.  They do this work through the University of Georgia and have 160 volunteers in Florida doing the work.  Now his daughter is also tagging and checking the Monarchs (our migratory Monarchs bound for Mexico) and this one was tagged there in Wisconsin August 20th - very cool!!!
So far this Monarch has been flying due west of where it was tagged!  Maybe it heard we have loads of flowers here for nectaring (tongue-in-cheek)!?!  No wonder this poor critter was just intent to rest this morning...that's a long flight over the past 16 days!
I hope this Monarch makes it's way all the way to Mexico and we can hear from it again...wouldn't that be the greatest story!!!
Keep an eye out and enjoy the sight, soon they will depart... 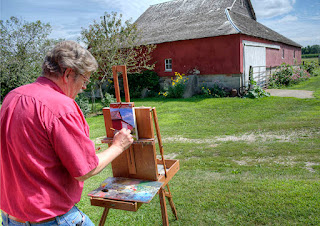 Its been a very busy summer here - all the usual summer work aside.  August has now exited and I'm still struggling to get caught up, to get ready - for my solo exhibit in 4 weeks!!! (Panic setting in...) 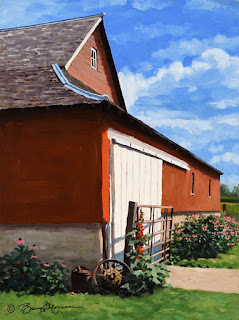 The exhibit will be at the Pearson Lakes Art Center in Okoboji, Iowa...with the reception and exhibit opening on Thursday, October 3rd, from 5-7pm.  The public is
invited! 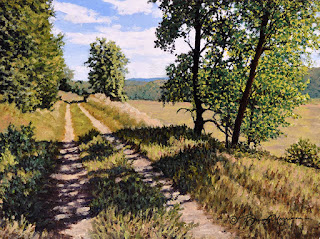 Back in August, just a couple weeks ago, I participated in the Pearson Lakes Art Center's Plein Air exhibit.  We had to bring in some canvases and get their backs stamped/signed and had 6 days to go out and paint outdoor landscapes on them.  I painted 2 scenes here on the acreage and one I had scouted out south of us in the valley.

I entered 3 paintings - the painting above "Summer Afternoon Along the Old Field Road" was awarded the Juror's Award...2 of the painting sold the night of the reception and the folks that purchased the Barn painting stopped out at the studio the next day and bought another painting to go with it!  Good experience! 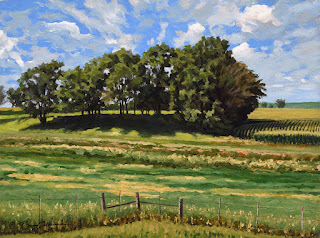 Now it's back inside the studio - the solo exhibit is just 4 weeks away - busy getting ready.