Those Pleasant Distractions of Spring 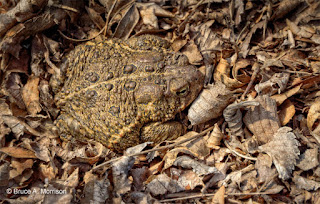 American Toad climbing out for some sun
photograph - © Bruce A. Morrison

Are distractions really a symptom of procrastination?  I think in my case that may have more than a bit of truth to it, but distractions can make you smile or even take some time to just mellow out a bit.  When spring comes - everything is a distraction!

Around here it can be as simple as the first butterfly of spring, a bird returning on its way through on migration, or the Pasque Flowers in bloom on the prairie.

This morning Georgie saw our first two Chipping Sparrows of the season!  I haven't seen them yet so I'm a bit distracted looking out the window hoping to see them after such a long break as winter.

A while ago Georgie came in a said she'd accidentally dug up a Toad in the Spinach bed...now "that's" a good distraction!  I went out and admired the beautiful spinach she sowed in the fall; we had some of it in our salad last week...that's a good distraction too!  The Toad was caked with dirt and was sunning itself on the pea gravel garden path, it later climbed back into the Spinach bed.

After a short while Georgie came into the studio to tell me another Toad had appeared, this one climbed up out of the leaf mulch in the Garlic bed!  And there was our first butterfly of the season on the radish bed's headboard!  Now that's a good distraction -  I had to see this!

The American Toad looked as if it had actually sprouted out of the Garlic bed's leaf litter and really made a nice image on my camera (above)...not what I'd consider a warm day (actually had a little rain mixed with snow yesterday) but the sun was evidently very appreciated by this Toad - a great distraction indeed!

Right now I'm typing this blog instead of working at the easel, hmmm I'm almost done, what distraction can I find now?  Ah its Spring...now that's the mother of distractions!