Breaking up! (To Spring, that is!) 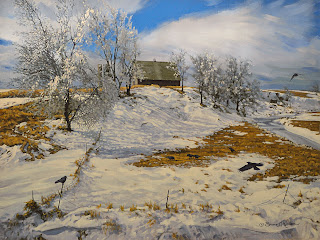 "Murder Along Little Waterman"
oil on mounted canvas - © Bruce A. Morrison
(click on image for a larger view)

Things around here are breaking up...to spring!  Spring at last!  Oh joy...well its trying anyway.  I finally finished my last painting this afternoon...its been a bugger (that phrase of some exasperation I hear on British sitcoms) but it is finally where I need to let it sit and occassionally give it a glance to be sure nothing has been overlooked or if I've actually got it right.
I haven't painted a bird for such a long time; I find I'm being a little hard on myself.  Birds are the thing that drew me to the natural world...the thing that eventually made the landscape so amazing to me.  One of my favorites from childhood memory is the Crow.  I can think of nearly anything cool about any bird (or anything in the natural world); the thing that transfixes my emotions with Crows is their intelligence and character...what a smart bird, and what characters!
When I was still in grade school, some "big kids" - (that's what little kids call any kid who is 4-5 years older than them) down the street and around the corner from us, had a pet crow named "Bob".  I never did know where they got Bob, I only knew it was in a cage outside their house and sometimes "talked" alot.  Well, it mostly just talked like a crow...you know - "caw caw"!  But Bob did have a small vocabulary in english...for one thing he could say his name "Bob"!  Pretty cool stuff as far as us kids were concerned!
One day Bob escaped its owners and the neighborhood was its oyster.  Bob became famous (or infamous) very quickly; he loved making mischief around the neighborhood in the summer by pulling clothes pins off of the clothes lines of all our neighbors for one thing - and that was no small thing as far as a few were concerned! (Where was their sense of humor??!!)  Bob also loved a "hand-out"; acorns were a favorite but he loved almost anything from the kitchen cupboards too. Bob was a regular at our house, once he figured out I loved feeding him, he would come to my brother and my bedroom window and tap on the glass until we came and pulled up the shade.  Our storm window had one of those home-made wooden flaps that you'd pull up and shove something out onto the roof of the front porch below.  I'd keep a stash of nuts there and hold one through the hatch with my fingers and Bob would snatch it away and woof it down.  It became a summer ritual. What a creature Bob was!
I could go on and on with all sorts of "Bob the Crow" stories but will let them just grow in my own mind for now.  I have also watched Crows through the years outdoors and always find them extremely facinating birds.  I've never painted a Crow before so this is a first for me.
The scene is just 3 miles from the studio here - "as the Crow flies"...sorry, couldn't resist.  And the landscape is actually current - winter is over but spring hasn't yet broken its hold...that is exactly what it looks like ouside right now!  (Except its actually snowing at the moment out there.)  The small creek is the Little Waterman, before it meets up with and makes the "Waterman Creek" that flows by across the road from the studio.
I have never attempted a landscape with snow and frozen rain.  It was a bit tricky getting a resemblence of frozen rain encrusted branches, but by not getting too carried away, I tried minimizing the effect by only having some branches "catch" the light and glisten.  The creek ice is breaking up and the snow has melted back in spots in the small pasture remnant, attracting the flock of Crows.  A flock of Crows is know as a "Murder".  This is basically about winter giving way to spring...it shows promise for the viewer - things are going to get better!  It obviously shows promise for the Crows as well; they'll have more and more places to search for a meal now.
Spring "is" showing some signs of life here at the acreage.  We've had Robins show up, our first Mourning Dove of the year arrived this afternoon in the snow.  We've had thousands of Canada Geese pass through in the last 10 days, and the Great Blue Herons began returning to the rookery across the road on the far side of Waterman Creek.
We'll sweep off the walks in the morning and give the sun a chance to clear some of the fresh and old snow off of the driveway, yards and pasture.  And we'll watch and listen, and welcome old friends back into our lives for another season.
at 5:18 PM 2 comments: