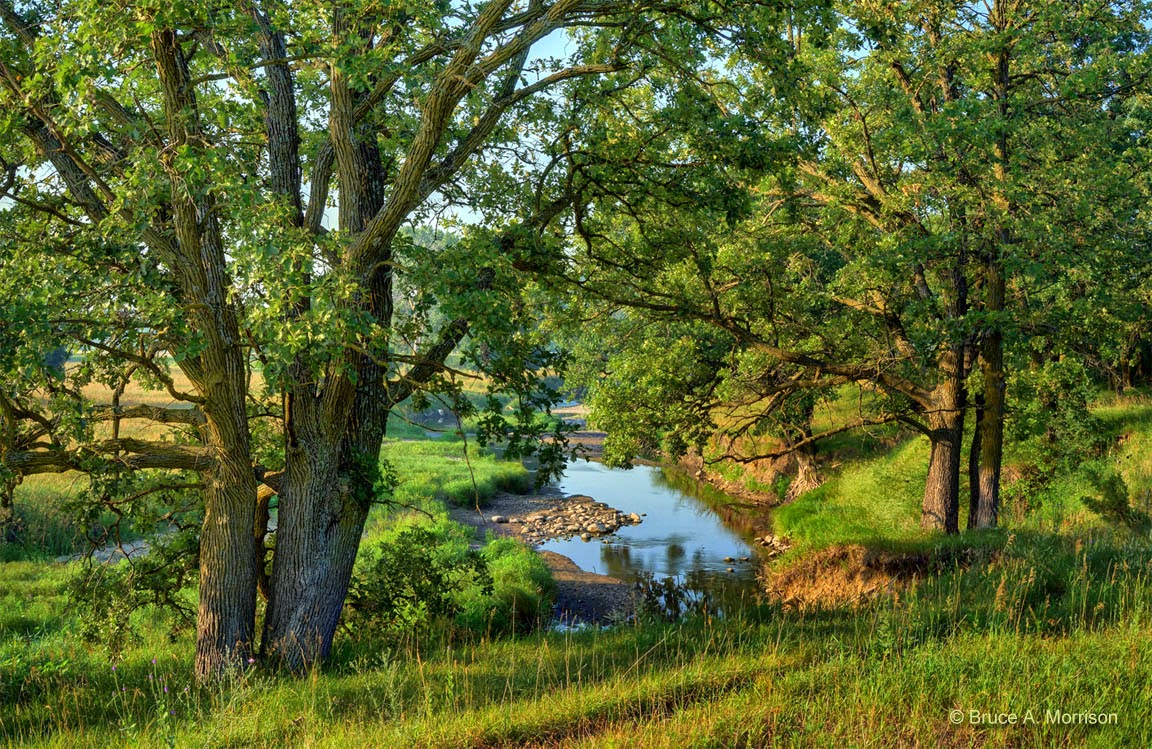 "Morning Beatitude"
photograph © Bruce A. Morrison
(click on image for a larger view)
July...when I was much, much younger "July" meant the middle of summer vacation.  It meant there was a whole month "after this one" before school began again!  It was a month of wandering, like June and August, but there was something else about July; it was ephemeral...you lived it, breathed the essence of it, held it close and then it was gone.
June seemed like a dream when it arrived; summer was here!  We languished in the
thought of it, but as it gained momentum and you grasped the opportunity - it was finished.  We had "wised up" by July; it needed to be savored.
When August came, the sense of well being was shaken...summer's end was near.
Now that I am older, I pay more attention to the calendar. Summer is no longer finished in August - there's September to look forward to...its not until the equinox that the end is true.  But this old duffer still remembers saying goodbye to July all those years ago; its not over yet but I'll still wish it back.
I know its cheating, but stepping back and savoring a "time and place" in my paintings or, as in this case, my photographs - can be a nice respite.  I hope you enjoy "July" in my work.
at 5:29 PM No comments:

"Anvil Across the Valley" - oil pastel on mounted canvas
© Bruce A. Morrison
(click on image for a larger view)

Its nearly mid July and I'm baffled where the time has gone; I do find myself in this position often, but its never any less frustrating!  Summer is a busy time - make daylight last this long and you're out there taking advantage of every minute, right?  Well, I guess you have to!

Our outdoor work now consists of bug hats and Deet.  All the rain we accumulated in June (14.95 inches) has bred the worst crop of mosquitoes I have seen in some time. The black flies (biting or Buffalo Gnats to some) are just as bad - they're the ones we really wear bug netting around for...I think Deet is like whipped cream to these little monsters!

But that June rain has made things pop!  And the prairie pasture is very nice this July...this is another good year for Butterfly Milkweed (Asclepia tuberosa) and Compass Plants (Silphium laciniatum) are prominant in the "green" everywhere!  I haven't been able to do much photography work yet this summer though...between the windy days and "life", the opportunities have been limited.

I did set aside an evening "job" for myself though.  I'd been admiring the many "tops" of thunderheads off in the distance the past few weeks and got the itch to do something that's been in the back burner for some 3 years.  I photographed an amazing anviled thunderhead out acroiss the valley here back in 2011.  Back then I had more than one person ask if it were something I'd ever paint.  I thought not at the time but I'm backsliding now and decided to first do a small study in oil pastel and see if it showed promise.

The image above was just finished last night and I think I'm fairly pleased with the possibilities it shows.  It only shows about 60% as wide of a field of view as the original photo panorama does, and the landscape, color and sky are composed more to suit me, but I think it'll work for a larger painting down the road!  Let's see what I can cook up next  - summer's not going to wait around!

Take care and have a great one!