Christmas Was White After All... 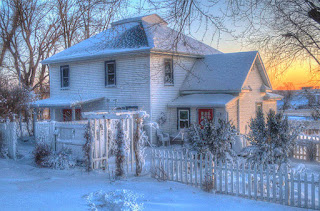 Am I getting old or what?   Here we were plugging along, being spoiled with warmer than normal days - Georgie even cut Spinach from underneath her row cover in the north yard garden a couple days before Christmas!  We were feeling pretty smug about it all...even been putting off mounting the plow to the truck this fall/winter, I mean - why bother, right?

Ha!  Of course it snowed - it was Christmas yesterday after all!  I only remember one Christmas in NW Iowa when there was no snow, and that was in the mid 1950's!  I remember fussing about how was Santa going to get around - guess I should have looked at the bigger picture...hey he had to deliver to the southern hemisphere too - DUH!  Shouldn't be too hard switching sleigh runners to wheels right? 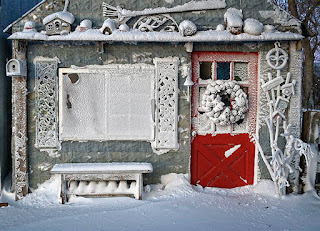 But ya, reality raised its head and there we were...spending the last day of no snow and decent temps getting ready for a Blizzard Warning the next day...not a lot of snow, maybe 5"?  Hard to tell when its horizontal.  Pretty good winds...a basic white-out for nearly 10 hours.  Yup, sure looked like Christmas...should be a lot of happy kids anyway!  Us old grumps will just have to enjoy the view - it is pretty😊 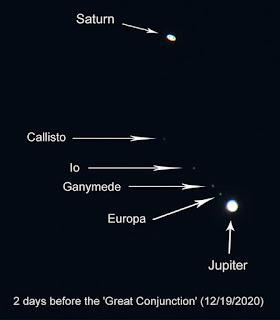 Just a week ago we were all excited checking out the "Great Conjunction" of Jupiter and Saturn in the SW sky.  For a good 10 days I thought we were doomed to cloud cover each evening, but two days before the event we got lucky and had a good look...it was kind of cool seeing both Jupiter and Saturn in the camera lens together...were able to see 4 of Jupiter's moons also but not any of Saturn's (Its just a camera lens after all).  The next night we were clouded in again and it seemed maybe the best day - the 21st - might be lost as well. 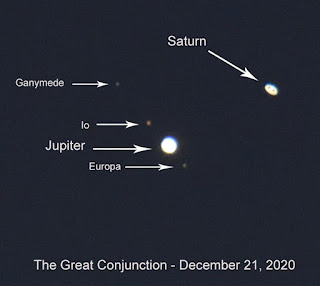 But we got lucky!  It was pretty windy the evening of the 21st but I did the best I could with the camera/lens...could see just 3 of Jupiter's moons...Callisto was too far out and too dim this time but Saturn was now very close in view with Jupiter.  I tried taking some normal scenes with the two in the background but they just weren't shots I was happy with.  This had plenty of hype for a few weeks before but really (not to rain on parades or the "emotional" event some portrayed) I remember plenty of single planet observations of Jupiter by itself - closer in its orbit to Earth, and Venus - especially last summer(!); that were much brighter than this conjunction...but it really was cool to see both planets so close by one another in the night sky!

And now we're hearing rumbles of another snow system coming in about 3 days.  But its now winter and we'll just settle in to the rhythm of the season; at least the days are now getting longer - that's a positive!

I'm looking forward to a better year ahead...and I know of a few Billion people thinking the same thing...at least we had a White Christmas here and didn't miss out!

Have a Happy and Blessed New Year, and be kind to one another!