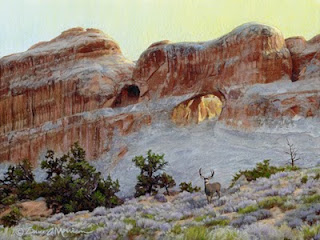 "Arches Mulie"
color pencil rendering - 5.25X7"
(click on image above to view as a larger size)
Just finished another small color pencil piece I've been working on for some time; this one being done for a specific purpose that I may go into down the road.  But it's not my typical subject and not a regional piece this time.  Occasionally I do stray off the tallgrass, and revisit places we've visited or spent reoccurring time.  This piece is from the memory/photo bank of a visit by Georgie and I to the Southwest...it's been a few years, but this particular trip was memorable for both of us.
Arches National Park was one destination of ours that was pretty amazing for the senses.  Going from NW Iowa to the grand and amazing geological formations of the high desert left an impression!  The colors of the high desert, the flora and fauna, and even the feeling of the place were almost magical; kind of like visiting a different planet!  We camped out there in the winter - yet had no snow, also with comfortable days...a place we could spend more time in without qualms!
There are many more places in our memory banks I try and revisit in my photographs and artwork.  In the meantime I hope you enjoy this "snippet" from a great time and place!
at 12:49 PM 2 comments:

"M12 Fall Bales"
(photograph - click on to view a larger image)
I Love the Fall!  It's wonderful out after a few frosts have calmed the summer's mosquitoes and other biting bugs.  But it's really the sky, the air and the sun I enjoy...along with fall colors, the crops being harvested, even the early evening light.
But sometimes things catch up with me...I am trying to work on the many image files I downloaded onto the hard drives.  I have processing to do.  A lot of processing to do.
Years back I would always look so forward to going through batches of film, either after I processed it or had it sent out instead.  I shot transparency film, so spent a lot of time over the light table peering through a loupe , checking for film scratches, sharpness and what were "keepers".  When this film returned from a processor, it was almost like Christmas...I'd eagerly open each box in anticipation!  When I processed it myself (E-3, then E4, then E-6 processing), I still got excited about what I was seeing but the work load would temper this enthusiasm somewhat.
I still look forward to going through images on the computer monitor, the old feeling of anticipation is still there but one thing I have noticed the past 10 years (I've been shooting digital since 2000) is the work load actually gets more cumbersome!  Why?  Well, when I shot film there was a "finite" number of exposures I could make...you'd have to be made of money for that not to be true! With digital I found I was freed up a great deal and did much more experimentation...also I took many more photos of what I'd call "idea" shots...these "ideas" pile up fast!  Soon I have more "ideas" than I can manage - on my hard drive or in my own head!  But I keep recording these ideas...and they need "Processing"...they have to be sorted and filed somehow so I don't forget them or loose track of where they're at.
Georgie knows how "organized" I am...uh...OK - "disorganized"  :)  But I still plug away.
The "M12 Fall Bales" photo at the top of this post was forgotten...but I only took it 5 days ago!!!  Uh...I also saw numerous...too many to count images that I forgot about, and they've only been taken the past 2-3 weeks!  I think I need to do a dump on my hard drive most people call a "head"!  I seem to be hobbled as to how much can actually go up there and still be retrieved without too much difficulty!
The "M12 Fall Bales" image is something I like to do; panorama shots are becoming more common...I've been doing them since around the time I shifted to digital film, and they were less common then.  There is now a myriad of software and cameras out there that automatically pull these shots together (stitch them) but I am still stubbornly plodding away - doing them the "old" way...stitching frames "by hand"...well, still with the computer, but without the automated programs.  (This shot is made from 4 individual frames.) This takes a while, but it still feels right to me.  Maybe someday the "processing" will get to me and I'll relent and go "auto" (?)...we'll see.
For now I'll still go through all these images that I shot just last week and had forgotten, or will uncover that great moment I remembered from last summer or spring - but tucked away so well I forgot where it was!
Never a dull moment here...now back to processing...
at 4:34 PM No comments: 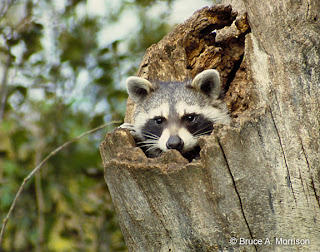 We can count on the Raccoons here to get themselves into trouble!
Been a lot of activity around here...the critters especially!  Hasn't been a night recently we haven't been serenaded with the Coyotes in the valley, and the night time visitors (Raccoons) to the yard are getting into mischief  here and there.  During the day we are watching the old familiar birds of summer leave us and old familiar friends, such as the Blue Jays, are becoming more and more vocal around the yard. 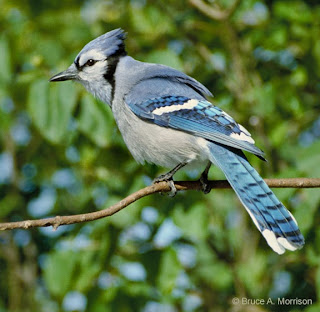 Georgie counted 15 Blue Jays in the yard this morning - it's a "party"!
(No, really - that's what a flock of Blue Jays is called...they can also be called a "riot"!)
It's been a busy time digging out from under the A.R.T. weekend too.  Still working on framing orders and commissioned work and watching the neighbors take out their crops - everyone is busy around here right now!
It's been a very warm fall here so far.  We have had a couple frosts but it gets right back up into the 80's and the air's full of all the biting/pesty insects you could ever shake a stick at!  Yesterday Georgie and I finally saw a few clouds in the sky (the past couple weeks have been clear) so we decided to take a Sunday afternoon drive down along the Glacial Trail Scenic Byway south of us, since we hadn't been along it since summer.  There's a temporary web site for the trail run through the Iowa Lakes RC&D at - http://www.iowalakesrcd.org/GlacialTrailScenicByway.htm if you're interested in where it's at...the DOT is putting together a final site that'll be finished sometime in the future.
The Iowa DOT (dept of transportation) has been working to revamp signage and revitalize the byways in the state.  This includes showcasing various places and events in the region and just the natural scenic aspects of the byway area as well.  I freelance throughout the year and last spring got a contract to shoot the landscapes and activities along this byway.
The autumn colors in the NW corner of the state here this fall are not as good as in years past.  Georgie and I found ourselves trying hard to find color compositions along the roads...you know things are not good when it becomes work to find fall photographs!  The reds, burgundies, and oranges are not present along the road ways here this year...the yellows are spotty in small numbers.

Fall color in the trees of NW Iowa are sometimes very hit and miss...sometimes it's just the luck of the draw.  I think the best autumn color this year is in the prairies! Check out this past blog showing Indian grass and New England asters for striking colors - then imagine it "en masse"!  Very satisfying color out on the NW Iowa tallgrass prairies right now! 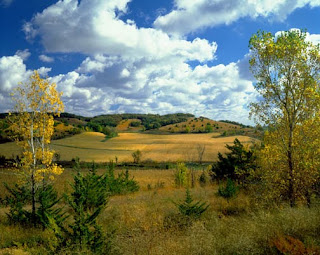 "Little Sioux Valley Autumn"
photo © Bruce A. Morrison
It was a beautiful weekend during the Artisans Road Trip...the fields here were busy with the harvest and those who were able to get out into the country side enjoyed the clear fall air and warm sunshine.
Here at the Prairie Hill Farm Studio we had many new visitors, which is a good thing!  I like showing work to folks that have never been here - and people that haven't been to the farm or studio are always amazed at the beauty of our location and the studio itself.  It's great to see first impressions in people's eyes!  :)
I'm happy to say that there were several original works that found new homes this year, and I'm always glad to see pieces go to a good home...warms my heart!  You'll notice a few "Sold Signs" at the Studio's web site.  I also have some commissioned work this year which I think is great as well!  In fact I was out and about this morning gathering field material for a commissioned oil painting...autumn is my favorite time of the year to be outside.
I'd like to take a moment to say "Thank You" to everyone who stopped by Prairie Hill Farm Studio to see us.  Thank you for your patronage, interest and support!
Have a great Autumn!
at 4:37 PM 2 comments: