A Little Early...or Too Late? 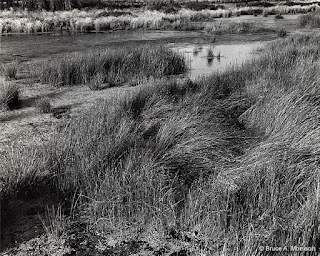 I'm going to celebrate Earth day a little early, although it isn't until this Sunday.  This will be its 42nd year and its now observed in 175 countries.  The thing that saddens me about our attempts to celebrate our planet is that we are truly in need of observing this day 24/7/365...did I get that right?  I mean every day we draw breath - all year long.

In my life time I've seen promise...more restrictions on industrial pollution, attempts to restore habitat and set aside more for our great grandchildren.  Many success stories of bringing species back from the brink.  Other issues too numerous to go into here.

But there is overwhelming opposition to these issues as well.  Cries of removing government restrictions on industry...regulations, etc.  I always try to be upbeat, even when I don't feel that way, but this is too important...its our lives...our legacy to our children's children's children!

The photograph at the top of the blog was the first 4X5 large format photograph I ever took of a prairie wetland - almost 40 years ago.  Its one of many images now on exhibit at the Witter Gallery in Storm Lake, Iowa in my solo exhibit titled "From the Tallgrass".  The photograph is a sad reminder to me - its of a wetland that is "no more".  Its now covered in asphalt...it was a beautiful working ecosystem...now the ground no longer breathes there...no conversion of CO2, no cooling the summer air nor filtering runoff and pollutants.  Wetland Choruses no longer sung.  Asphalt.

Recently there was a bill in the Iowa legislature to sell a thousand acres of Iowa public land.  The gist of this bill was to sell 1000 acres of public land that could still be farmed.  Now I don't know what the legislator(s) who put this language into the bill were thinking of using the money for that would come out of a sale of public land, but this was our land - your land , your grand kid's land.  Iowa is "the" state in this union known as "being the most changed" as far as its resources...its natural heritage.  AND someone "still" feels we've gone over the top and need to sell parts of a park, or preserve, or prairie ground to return to what it was rescued from!  You'll hear arguments of a need for more corn to feed livestock, for more income opportunity for some individual(s), for more land to give back to the state's coffers in taxes.  There's always a reason to go back, to not look forward to what our future is potentially holding for us if we only think in the "Now".  Thank goodness there were enough voices raised with this bill (mine included) that the language was dropped.

So I'm starting to celebrate the official Earth Day a tad early and plan to keep celebrating, being concerned, loving and embracing this amazing rock we're circling that close star with. 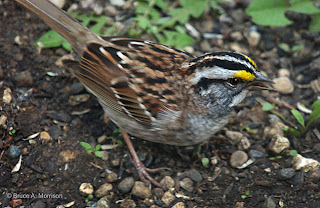 I'll celebrate with the little things - this morning the White-throated Sparrows returned!  They'll be around now for a few weeks before continuing on north to their breeding grounds.  I'll celebrate them and every spring migrant that pauses as they pass through.  I'll celebrate the rain we're receiving today!  I'll celebrate the old farmstead we live and work on...not as farmers but still embracing the earth with our vegetable gardens, berry crops, the native prairie pasture, the bee hives lending a hand with pollination.  I'll celebrate the Earth each day with my art work and photography...with the sounds and smells that are our natural heritage.  I'll support organizations that are working hard to preserve this natural heritage - not squander it on the profit of the moment.

In Iowa, check out and support really worthwhile organizations - with your heritage in mind; like the Iowa Natural Heritage Foundation and the Nature Conservancy.  And an excellent publication that shares what others are doing every day to embrace their natural heritage is Woodlands & Prairies Magazine...I highly recommend these! 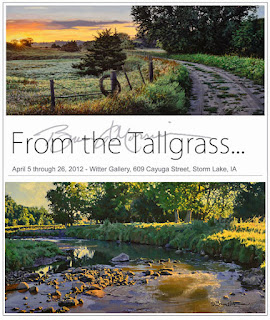 artwork  © Bruce A. Morrison
(click on image for a larger view)


Thank you to everyone who made it to the exhibit's artist reception!  If you haven't been able to stop by the Witter Gallery in Storm Lake just yet, I hope you can make it sometime while the exhibit is up through the 26th of April!