Someone coined days like this morning as a "Bluebird Morning".  I think the still clear air and a beautiful sunrise make the grade as a Bluebird Morning!

They didn't pose for me but as I was shooting this landscape, a couple Beavers were swimming in the pool of the creek, in front of the foreground tree.  And a hundred or so Canada Geese flew over calling all along the way and into the distance...a Bluebird Morning must be a good thing!

The 2011 Artisans Road Trip is in just 5 days!  See photographs like this from the "neighborhood" here and many other paintings and drawings here in the studio at Prairie Hill Farm. 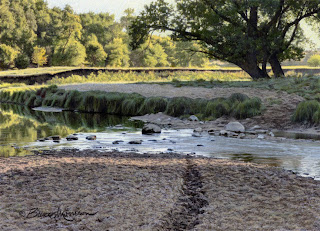 Way back when I was a kid, I used to spend a great deal of time walking the farm country west of our town where I grew up in NW Iowa.  I had (still have) a good friend whose family had a large farming operation and a good herd of what I believe were Angus cattle back then.  Well maybe they were Limosins or some other breed of predominately black cows, I don't know, but I got quite used to walking their paths and occasionally walking through the herds.

Lately I've been walking several places in the "neighborhood", and really the only kind of surroundings I care to traverse are pasture and woodland, but mostly the river and creek bottoms...great place for an interesting stroll with the cameras.

One thing about cows, they seem to know the best stream crossings, and I usually trust them.  Some time back I was walking along with a scattered herd, along Waterman Creek near here; it was a wonderful little stretch of stream mostly uninterrupted by fence lines.  While taking photographs along the creek bottom I noticed this great old Ash tree casting shade along a sandy bar in the bend of the creek.  It was early morning and the cast shadow and early sunlight were making for a really nice image.

I don't always think "photograph" when shooting scenes like this...I often get an idea or feeling for the scene and just go with it.  Later when I'm back in the studio processing files on the computer, the image itself decides whether or not something "stays" as a photograph or gets used as material to do a painting or drawing from.

As you can see, I ended up doing a small color pencil drawing of the "Cattle Crossing" there along the creek...and yes, I did cross there :) 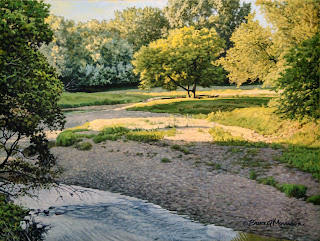 "Summer Evening on Waterman"
oil on mounted canvas - 9X12"
© Bruce A. Morrison
(click on image for a larger view)
SOLD

Just finished a small oil painting here in the studio over the weekend. This painting is of our favorite creek and at a location we pass nearly every week, all year around.  Its one of those scenes that has screamed to be painted and this late evening light, with the long shadows and bright passages of the last bright sun light was finally perfect last week.  Its not a scene I'd care to try plein air...for two reasons - I don't believe I'd do it justice in these last fleeting moments, and this scene is only visible as you cross over a small rural bridge in our "neighborhood"...I don't like the idea of standing on a little bridge when a tractor or wagon has to come by and cross!

I hated having to work inside as it was glorious weather out there!  But time is closing in on the 2011 Artisans Road Trip and I've been working on new works for the studio/gallery here for visitors to see when they stop in over that weekend.

The Artisans Road Trip is a great time for everyone to get out and travel the roads "less traveled" and visit artists in their studios, and get to know them a little better!  The 2011 A.R.T. event is the very end of this month - and the first Saturday/Sunday in October!  The exact times and dates are - Friday September 30th from 4 p.m. to 8:00 p.m., and Saturday and Sunday - October 1st and 2nd, from 9:00 a.m. to 5:00 p.m.  If you'd like more information on the 2011 A.R.T., check out the web site and visit the artists listing there...check out individual artists by clicking their names and even check out the regional maps for their locations (the "Maps" link on the home page). 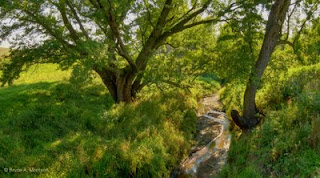 "Late Afternoon on Dog Creek"
photograph © Bruce A. Morrison
(click on image for a larger view)
The landscape is the staple of my winter work here at the studio, and the summer has not stood still while I spent the last several weeks putting the finishing touches on the "From the Tallgrass" exhibit - so I've been out hiking around the "neighborhood" trying to catch those last summer days before autumn throws too many hints around.
The past couple summers here have been a major bust with area streams...flooding creeks and rivers.  But after about a 23 month trend, we've gone through a decent dry spell and I've tried to revisit the creeks in the familiar haunts nearby.  Now, I'll admit I've been searching for ideas for future painting projects - not photographs...but things have not been going that way!
I've spoken of this quandary to a small degree in a recent issue of my studio newsletter...I like to gather information in the field for future artwork ideas.  I compile this information (files of photographs) for later reference material to work from - usually during the winter months when I'm in the studio almost all the time.
But I've been coming up with photographs I like as "photographs"!  Why bother redoing something that works as it "is"?  I don't like the idea of reworking something that already works!    The above image of Dog Creek, a few miles south of here, is a good example.  I found the late afternoon back-lit subject shouting for attention; the small creek quietly meandering in its narrow channel, catching the light in an almost elegant manner...the open shadows inviting the eye into the scene, embraced by the canopy of branches.  What a nice painting idea!
The quandary arises once I'm back at the studio "processing" image files from the day's explorations...dang it!  It works so well on its own, and I like it!  That's important too right?!  OK, another nice photograph of a small prairie stream may soon find its way to the studio's gallery wall.  The idea of a painting lost...well at least for now; no need to redo something that works quite nicely already...there'll be another painting down the road eventually!
at 10:01 AM No comments: