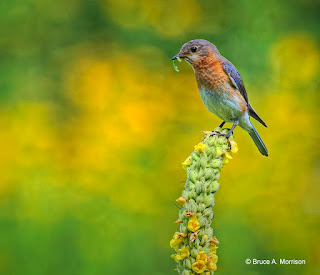 Its been a warm one for sure and the faucet has been constricted a bit too.  And here we are in July already...geeze - mid July!  This is getting way out of hand; I know I'm easily distracted (Squirrel!!!!!!!!!) but give me a break!  This was once a weekly blog and now its almost quarterly!

We have been keeping busy around the acreage...the gardens are all doing extremely well thanks always to the Mrs. - Georgie runs a tight ship and works really hard at it too...been too much water hauling with the low rain this summer but its going well for her.

Georgie and I started the early summer with a huge brome problem in the pasture where they laid a septic field in June of 2019...I mean huge!  Although there were some "survivors" in the disturbed part of the pasture, it actually turned into nearly solid brome.  Ugh.

I started weed whacking it bit by bit and hauling our "hay", but it looked like a better method should be found.  Georgie started cutting it out - at the base of every clump - literally...I think it took maybe 2 weeks of every morning to get it done...I'm sure we could have made a nice big bale out of that mess!  Then I went through and treated clump stumps...its going to be a process - trying to get new things to survive in chest high brome is problematic to say the least. 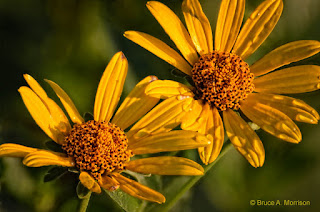 Heliopsis helianthoides getting to be a real pasture/ditch bully here!
(photograph - © Bruce A. Morrison)

Other parts of the native pasture are doing well and other parts have issues too...just takes a lot of monitoring.  Interestingly one of the problem plant (forbs) this year is decidedly Heliosis helianthoides or False Sunflower...it has now completely filled the south ditch and has 30% of the north - spilling over into the north pasture!  Particularly bad in the NE triangle of that pasture.  I have spent a few days earlier in late spring chopping their bases and hauling them out but now can't even see where I'd done even that much!  This stuff is very hard to pull...a 2 year plant will "NOT" pull no matter how hard you try...its better to just suck it up and bend over (harder now than it ever used to be!) and cut it with a knife or pruning shear - this will take more effort on my part or things will turn a direction I don't even want to think about. 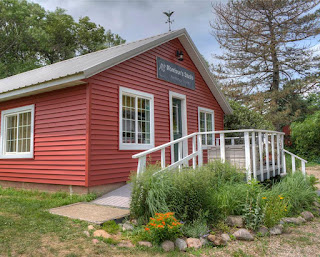 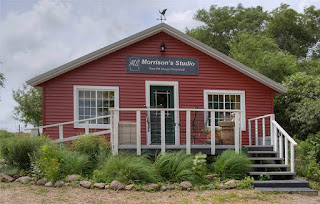 Wow the studio finally got a facelift!  Georgie was getting tired of having to paint the old siding - it would not hold paint, no matter the brand or cost...never did.  Plus the old used door was not very efficient - even took a picture this past winter of a snow drift inside the studio, yes "really".  So now I have a new door and siding, plus the contractor (Thanks Jeff Halverson!!!) even building wrapped the sides again and clad the wood window frames in aluminum so they don't have to be painted again either!  I'm spoiled. 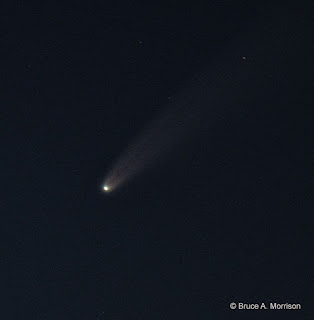 
Its comet month in July - C2020 F3 (Comet NEOWISE) has become visible to the unaided eye, both in the morning and in the evening...but only after dark.  It took me three tries to finally find it and get a shot (above).  My first mistake was thinking that 4:45 a.m. was early enough to get up and see it...wrong.  My second mistake was go out at 9:30 p.m. and see it...wrong again!   Ugh, frustrating.  But then I found some more specific times relating to viewing the comet...it just needed to be earlier or later...depending on the time of day of course.

I finally found NEOWISE out back here after 10:15 p.m., but I had to first spot it with the aid of binoculars...I'd never have found it without them.  It's just too dim yet.  The above picture was taken with my 200-500mm lens with a 1.4 converter attached, which gave me 700mm at F8.  Now F8 is not fast by any stretch of the imagination but ramping up my ISO (ASA to old timers like me) to 3200 gave me the image above with a 1.6 second exposure.

If you're interested in seeing NEOWISE I'd recommend going out before 4:00 a.m. or after 10:15 p.m.  It is getting brighter but I'd still recommend using binoculars to "find" it first then you can see it without if you like. (Its much more interesting magnified of course).  In the a.m. look to the left of where the sun will rise (NE)...you'll see Venus rising at around the same time in the east - that is bright!  NEOWISE will be dimmer so it'll take some looking first.  In the p.m. look right of where the sun set that evening...in the NW.  You can use the pan of the Big Dipper as a guide...follow down and to the right and it will get you in the right vicinity...again use binoculars to help locate it first.  I believe its brightest (closest approach to the earth) is around the 24th of July, but there's no telling if it will hold out that long...comets are unpredictable. 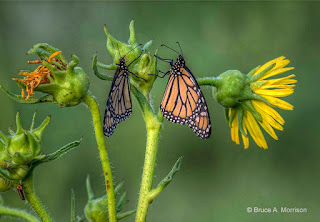 We are having a nice number of Monarchs here this summer...hardly a day goes by that I don't see Monarchs in "tandem" flight, and we're seeing good numbers of caterpillars as well.  But many other insects seem absent or at least in much lower numbers.  I judge this by what I encounter when I'm pulling weeds...I'm just not disrupting or bumping into things like I normally would have during other summers past.  But we have been having nice numbers of Lightning Bugs (Fire Flies to some) each night...if you look closely at the lower left corner of the photo above you'll see a Lightning bug resting under the forming blossom head.

In the meantime I'm taking much of the summer off...was out pulling brome in the pasture this morning and will likely be out this afternoon with the shears cutting out elms on the north pasture...elms and mulberries mostly...maybe a few locusts.  But if the sun comes out from behind our current overcast, I may call that off too - its been beastly hot this summer!!!  And dry - here any way!

Everyone stay safe out there and be kind to others please.  See you down the road this summer!!!