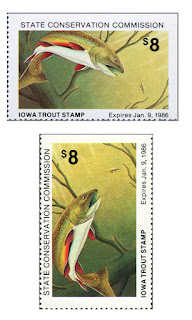 The next post for "Archived Works Friday” is a color pencil drawing from 37 years ago. As I mentioned before - I'll post a painting, drawing or serigraph (silkscreen print) from the "archive" files of years past...and give a little back story on the work. I hope you'll find it interesting!
Hardly any of us are strangers to color pencils...who didn't play with them as kids...they were less messy than crayons, but not as color filled with contrast and pigment as crayons were. The color pencils “of old” had wax based pencil leads and broke very easily, nearly impossible to erase and hard to get some “punch” out of!
My first (semi serious) attempts at color pencil were of birds of prey...I believe it was a Peregrine Falcon on a cliff above a waterfall or something like that. I have lost a clear memory of it – maybe out of self preservation! I do remember exhibiting it and some others at the first Ft Dodge sidewalk art fair when I was around 12 years old.
Years later I became aware that this “second class” medium was getting more attention. People were really starting to do some impressive work with them; and the pencils themselves were a much higher quality and even more permanent than they had ever been years back. I started experimenting with them and found they were “fun”!
In the mid 1980's (and earlier) the state and national conservation stamps had become all the rage and artists were going out of their way to enter into the competitions for them. The Federal Duck Stamp was the holy grail. These “stamp” artists and contests even made their way into American lore in the 1996 movie “Fargo”, where a pregnant police woman from Brainerd, MN is bent on solving some murders, while her husband stays home entering duck stamp competitions. Ha! Funny stuff for such a dark comedic crime thriller!!!
I decided to try one of Iowa's conservation stamp contests in 1985...I was fond of fly fishing and decided I'd do a Brook Trout, since they are actually native to the far NE Iowa cold water streams. The Iowa Brookies are pretty small delicate trout, matching the small spring fed streams they originate in. I, in all my “great wisdom” (ha!!!!) decided I'd make my Brook Trout a real hog and impress the judges! (Oh boy...where was my head?) Anyway, I decided to do the Brook Trout in color pencil, as I was getting pretty confident with this medium.
On the day of the Iowa Conservation Stamps Judging in Des Moines, we decided to go down and actually witness it! This was pretty exciting stuff for us “wannabe stamp artists”!!! When the Trout Stamp entries were shown I searched all through the images to find mine (of course) and was horrified! They hung mine up “SIDEWAYS!!!!” Auuughhhh! I could not say anything as the judges were not to know the identity of the artists (no artwork was signed on the front). After anguishing over what had happened, and as the judges were finishing their deliberations – another artist across the room pointed out that they had a picture hanging sideways – (THANK YOU!!!)...leave it to an artist to recognize something so obvious to any “SANE PERSON”!!!
The judges all stepped over to my drawing...one of them reached out and turned the picture upright...they talked among themselves for half a minute maybe, turned around and announced my big fat Brookie as the selection for the Iowa Trout Stamp for 1985!!!!
This comedy of errors was transferred to the actual stamps when they were printed...I was again horrified when I received my stamps to sell with my prints – they were printed WRONG! I did NOT want to sell sideways stamps with my prints and contacted the Iowa DNR. Well...they would not reprint the stamps -there were 30,000 of them! BUT...after a bit of soul searching they agreed to reprint 300 the correct way so each of the 300 prints in my limited edition would have a correct one...I had to make an agreement that the only way someone could buy a correct stamp was to buy a print...how much dumb luck can I wrap myself in!!!!???? It was just nuts.
It soon hit the news across the country that 30,000 1985 Iowa Trout stamps had been incorrectly printed and “ONLY” 300 had been printed correctly! I was busy for a couple weeks shipping prints and correct stamps everywhere across the country and even got into a bidding war over the original drawing. It was almost as crazy as a movie, but without murder and mayhem – thank goodness!!!
I've stuck with color pencils ever since – only the modern ones are like day and night compared to those of those crazy days in the 80's and earlier!
(This drawing and other archived artwork can be viewed at - https://morrisons-studio.com/archived-works/ )
"Brook Trout – 1985 Iowa Trout Stamp" – color pencil drawing - © Bruce A. Morrison
(from a California private collection)
at 8:27 AM