Out of the Deep Freeze and Loving It! 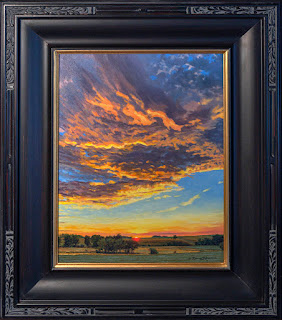 "Morning Glory" (framed)
oil painting - © Bruce A. Morrison
It's good to get out of the freezer! Yes it has been a frigid one the last half of February...nothing to write about, besides my fingers have been too numb to type!  Ha!
Well I did try to warm things up a bit in the studio...have been doing some small commissions for people and then decided to try something just for myself...I decided a "Sunrise" was in order.  Haven't really done a sunrise just for a sunrise's sake...had done a painting many years back that had a sunrise in it, but it was done more for the mood and color play in the landscape...that was a painting called "Daybreak - Southwest Corner Fence Line".

"Daybreak - Southwest Corner Fence Line"
oil painting - © Bruce A. Morrison
My latest depiction of a sunrise is "Morning Glory"...it was painted from a sunrise one morning this past August here across the valley from the house and studio.  I was a little unsure of this one as it was a very vivid sky with more color than I've ever thrown into a sky on the easel before!  But after I got into it, I was really enjoying the process!  In fact I've missed painting skies for the sake of it and do want to do more...doesn't need to be another sunrise but then again maybe so...whatever happens is fine by me.  I'll post a larger image below for more detail. 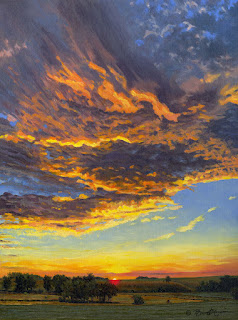 "Morning Glory"
oil painting - © Bruce A. Morrison
It's finally March and this first day is a fairly pleasant (albeit somewhat chilly) one...guess that means that March has come in like a Lamb...hopefully Spring doesn't throw too many hard balls at us! But regardless, we're finally out of the deep freeze and loving it!
at 1:46 PM