Glaciers still in the yard but its Spring! 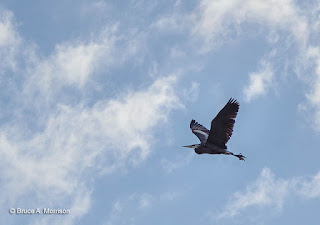 Great Blue Herons in the valley
(photograph - © Bruce A. Morrison)
Spring has finally arrived the the valley here and we have been most fortunate as far as our flooding here.  A week and a half ago we were taking on water pretty fast and the valley in front was threatening lake front property once again, but fortunately all the culverts broke open in time to spare the road and its been dropping back to the channel since.
We are so, so lucky and count our blessings as we watch the dire situation in extreme western Iowa and the eastern half of Nebraska...a perfect storm did happen after a heavy snowfall and rains exacerbated the completely saturated soils from last year's record rains - it was all downhill from there for anyone in the flood plains of the Missouri River and its tributaries.   Our hearts and prayers go out to everyone affected by the flooding going on right now.
Things are starting to look "normal" here for a change...we still have 4 foot drifts covering most of Georgie's barn garden but she was able to get into the yard garden and peek under the snow flattened hoops and see that the spinach did survive the winter this year - YAY!!!  Last year the mice had set up shop under her row covers and dined on spinach all winter...we have strong mice out here! 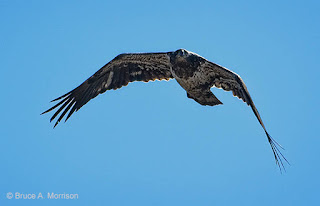 Juvenile Bald Eagle
(photograph - © Bruce A. Morrison)
We have been seeing a few Great Blue Herons returning to the Waterman Creek rookery the past few days, but in low numbers so far.  Yesterday we had 8 herons riding a thermal high above the rookery.  The last time we witnessed this there was "Eagle trouble" brewing.  Well, sure enough, a couple juvenile Bald Eagles were harassing the herons - one flying around the hovering flock and another sitting smack in the middle of the rookery!
Eventually the two trouble makers tired of the game and headed off right over the studio deck where Georgie and I were watching - giving us great neck bending looks as they passed.  In the next hour 8 more Bald Eagles flew past the acreage - bee lining straight north on the wind.  On top of that uncounted flocks of Canada and Snow Geese streamed past heading north as well - spring is definitely in play now!

Grateful that Spring has arrived - prayers to all those being faced with loss to flooding.
Take care and be good to one another!