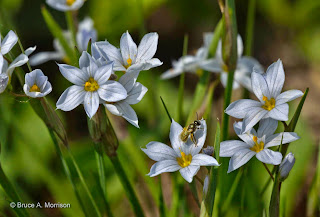 Blue-eyed Grass with native Bee
- photography © Bruce A. Morrison
(click on image for a larger view)

I've written about Phenology before; if you keep any kind of record of events or relating to events (like writing down rain amounts on your wall calendar) - then you're practicing Phenology.  The Aldo Leopold Foundation states that Phenology is " a segment of ecology focusing on the study of periodic plant and animal life-cycle events that are influenced by climate and seasonal change in the environment."

For instance, we keep records each year as to when certain birds first appear in the spring or fall during migration, when the Great Blue Herons in the Waterman Creek rookery across the road first return, when the native plants in the prairie pasture here begin blooming, and so on.

We don't specifically do this because we're doing scientific research or something of that nature, we also do it because we're just plain interested and its fun!  It also can help with just plain curiosity.

We've all heard someone exclaim that "things are sure early this year"!  Well, are they really?  Or are they just early compared to "last year", or are they running at an average?  Phenology can answer a lot of those questions.  But one reason I like keeping records like this are to "be prepared"!

If I know that the hummingbirds usually show up at such and such a time (on the average), and we put the feeders out a couple days ahead of time - we're ready for 'em!

I also know that certain other events like bloom time can be prepared for...here on our prairie pasture one example is the Blue-eyed Grasses (Sisyrinchium campestre).  It is such a small flowering native forb that it can be easily missed if you're not out and looking in the right places.  But I know (from past years) that it usually shows up on May 15th.  But some years it may be early or late, so I'll start looking during the first week of May just in case.  This year it was fortunate I did - it showed up here on our pasture on May 7!

The blossoms of this tiny member of the Iris family measure around 1/2" or slightly less across; so you can get an idea of how small the little native bee (specific species unidentified) actually is!  Iowa has maybe around 35-40 types of native Bees and some, like this one are quite small.  When does this bee usually show up here on our pastures?  Well - when their forage does, so each year I see this bee its on the day I find the first Blue-eyed Grasses in bloom!

Just because one plant bloomed early, does that mean everything is?  Not necessarily but sometimes other things show the same pattern as well...this year the American Toads here began singing the 3rd week of April - that is early for them also...about 2 weeks early!

Ya, some years those cycles we all pay attention to are behind, and some years ahead - its fun keeping track and looking forward to the next arrival or departure...that's life ya know!
at 2:11 PM No comments: