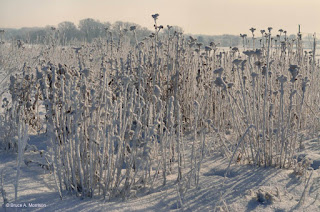 "Winter Prairie Pasture"
photograph - © Bruce A. Morrison
A Happy New Year wish for Everyone out there - ALL our BEST to you and your loved ones!
...Bruce and Georgeann Morrison
at 4:34 PM No comments:

Heading Into The Solstice 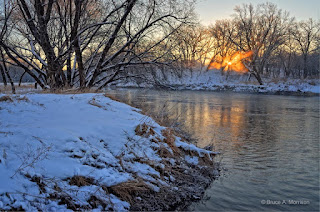 Well we're sliding into the Winter Solstice tomorrow on the 21st - its hard to believe isn't it!  My mind's still stuck in August!

The thing I always look forward to come this day - the days gradually begin getting longer - which means more sunshine and "eventually" warmer days!!!  But I know that's not a very appreciative opinion of winter is it...sorry about that (fingers crossed behind my back).

The Winter Solstice is officially here Monday, December 21, 2015 at 10:49 PM CST; at least if you live in Sioux Falls, SD...but that's certainly near enough to us to make it count as "close enough"!

Like many other people, I hear reports of odd weather for this time of the year; we're no different.  The image above was 2 1/2 weeks ago south of the studio and the snow is GONE...hasn't even been cold enough for frost to enter the ground yet - and its nearly Christmas!  But we have had 18+ inches of snow at the studio since late November, so that at least sounds right for the eve of the solstice!

Either way - enjoy the new season, and get out there if you get a chance.  After all, the Winter Solstice only comes 'round once a year!