Summer on the Tallgrass 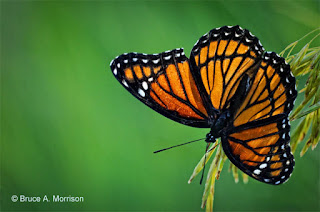 "Viceroy"
photograph - © Bruce A. Morrison
I've been trying to document the native plants on the pasture; spring has gone by so quickly and the spring forb (wildflower) blooming has zipped by too quickly!

Two evening ago I was out after the wind finally got manageable for photographing and was shooting some video and trying to get still shots when I could.  There was a Monarch flying around quickly here and there but I didn't try chasing it...it was just to animated and would hold still for me.  When I was packing it up and heading back to the studio I walked past a Viceroy nectaring on, of all things, Brome grass!

Well I wished it'd been a Monarch but it was so cooperative I took several shots and did some video of it as well.  I hate admitting there is brome in the pasture but there isn't a prairie that hasn't struggled against that common/nasty cool season (Eurasian) grass the farmers embrace for grazing/haying.

You can almost always tell a Viceroy from a Monarch by its size - its about a third smaller than a Monarch.  Also the Viceroy's hind wing has a line that intersects horizontally through the vertical veins - not seen with Monarchs...the resemblance is remarkable though, and even I have to stop a look more closely when they show up here...they're fairly common here every summer.

I was taken a bit by surprise with a butterfly this size nectaring on a grass in flower...maybe its not uncommon, it is just something I haven't seen before.  I have seen small Skippers and those small Blues, along with Hover flies and such nectar on grass florets but this was new for me!

I'll insert a video of this Viceroy (The link is on You Tube at - https://youtu.be/v4K3v9Zrl_U if this blog doesn't show it for you)
Have a great summer out there and stay cool!!!

Late Spring on the Prairie! 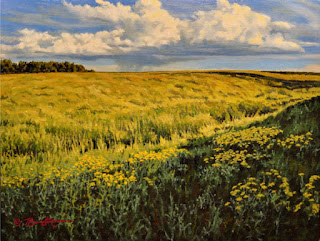 "Passing Prairie Showers"
oil painting - © Bruce A. Morrison
June never seems to let us off out here on the prairie.  We sure appreciate the rain but high winds, lightning and hail are the things that keep us on our toes.  As I type this blog entry a good thunderstorm with high winds is passing through the valley.  A few areas of tornado activity are forming NW and NE of us - nobody needs that!
But this painting I just finished really depicts the "normal" passing showers that are so common out here in that great openness of the Tallgrass Prairie.  I used our south pasture as the "model" and borrowed some patches of Golden Alexander in bloom, from the north pasture to place in the shadow cast in the foreground during the late afternoon.
Late Spring and Summer paintings can be difficult because of the overwhelming greens out there so I like to take some artistic license and warm up the image with the late afternoon sunshine and neutralize it a bit with foreground shadows.  It was a bit warm the day I laid this idea out but even hotter (mid-upper nineties) while I painted in the studio - thank goodness for air-conditioning!
Hope you're staying safe and keeping cool out there!
at 3:50 PM No comments: