Trying to Keep Up! 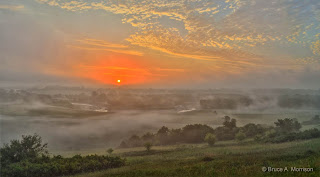 Its been very hard keeping up with everything lately!  Life is more complicated than we give it at face value, isn't it!?  The work in the studio and around the acreage is keeping us on our toes lately...this is always a busy time of year.
I've also been trying to keep an eye on our pasture here because I often can use it as a gauge as to when things might be at their best on the prairies nearby.  I had been noticing our Dotted Liatris (Liatris punctata) and Rough Blazing Star (Liatris aspera) beginning to look pretty good, so I thought I'd run off to Waterman Prairie this morning where I know these things are in good number...see if I could catch them before they get past their prime.
When I got up everything was really socked in outside; I actually woke a few minutes before the alarm rang - a Coyote out front of our place woke me with its yowling; sounded like it was missing someone or feeling left out!
I procrastinated a bit, not sure if the fog would lift enough for some decent images, but eventually talked myself into getting in gear and heading down the road.  I went to the O'Brien No.1 site again; this is where I'd been watching some decent locations for late summer prairie blooms.
When I arrived it was so thick I decided to just walk to the ridges above the Little Sioux River, figuring I could scout some along the way.  There's a hanging valley there...I'm sure I've talked of it in the past.  The farmers who access fields down below the prairie there use it as an access road...its actually an ancient river bed left hanging along the edge of the hillside.
No sooner had I reached the ridge top the sun popped out of the fog and the curtains down below me were opening to expose the river below.  I scrambled and got a few shots before the river and valley below were gone again...if I'd been a couple minutes or more later I would have simply missed out!  It was truly a "WOW" moment! Serendipity?
I walked around checking for late summer liatris but the majority were still in tight bud...some years you get lucky and they all go at once - that would be nice!  But no such luck this morning. 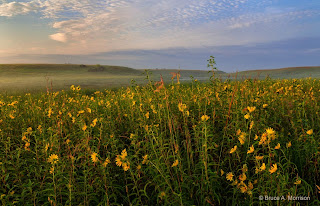 "O'Brien No. 1 Sunflowers and Big Bluestem"
photograph - © Bruce A. Morrison
(click on image for a larger view)
I kind of did a mental inventory of plants as I slowly walked back to the road and did see some surprises; for one there was still Spiked Lobelia (Lobelia spicata) in bloom!  That's nearly always done by early August in my own pasture, and this year I couldn't find it; I suspected because of the drought we'd been experiencing again.
The Sunflowers were way ahead of our pasture here as well, but the stand I stopped to photograph is in a low lying wet area so that may be the reason.  I was seeing three varieties, may even have missed one.  there was Maximilian (Helianthus maximiliani), Sawtooth (Helianthus grosseserratus) and Showy Sunflower (Helianthus laetiflorus) in bloom intermixed with some good clumps of Big Bluestem (Andropogon gerardii) also in bloom!
A good morning for a wet walk, ya the air was 100% humidity - even my glasses kept fogging over trying to look through the camera's viewfinder.  But a beautiful morning on the prairie!