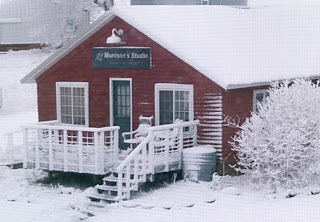 May 1st at the Studio?

This is so weird its almost funny...well not quite, but weird for certain.  Here it is May 2nd and we're just shaking off a snow storm from yesterday!  Not a bad storm as winter goes, but its the third month of spring now!!!  I think we're lucky though; our storm ended before nightfall and the rest of the state got theirs during the night.  Ours has all but melted now and they just woke up to twice or more of the snow than we did!  We've been so dry the past 9-10 months that I'll accept it just the same! 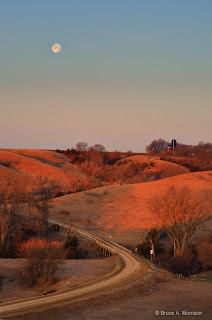 I had gotten used to the idea that it was "finally" spring here.  Last Saturday I went for a good walk in a couple areas south of here on Waterman Prairie looking for Pasque Flowers.  Had a nice big waning moon setting in the west while I was up on one of the many ridges and tried photographing the moment.  I think this would have been more interesting/spectacular if it had been "really" spring, or even summer , fall or winter...this time of year is too dull!  Wait for some green I guess?  By the way, the Pasque Flowers were up this morning but "just" up...I was going to give them some time but now the weather's put things off again.  Maybe I'll still see them before they're done. 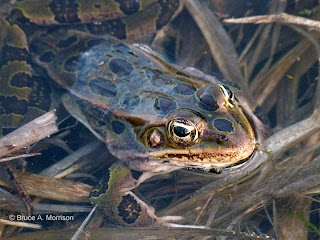 A couple days before our May snow, Georgie and I went out to drive around and listen to the frogs.  They had been singing with great gusto for about three days prior to our outing and did not disappoint us when we went on our excursion...we LOVE to listen to them!  We'd even been sleeping with the windows open to listen to them each of those nights...they just lull you to sleep.  Wonderful music!!!

The shot above was a Northern Leopard Frog who was playing the "If I don't move - he won't see me game" on Monday night when Georgie and I were out and about.  I think they're likely "hung over" now from what the weather has unloaded on them!!!  I wonder if this weather event has messed up what they were working so hard to do the past week?  Maybe they'll have to start over?  Haven't the foggiest.  Would like to hear more singing up the hill here from the backwater of Waterman Creek down below us though!

And the Great Blue Heron Rookery across the valley from us has been hit 4 weeks in a row now, by ice, snow and freezing rain storms!  I wouldn't blame them if they packed up and went back to the Gulf of Mexico!  But I hope they persevere too.

Life is interesting on this little blue ball we live on!

All that singing is called: a breeding chorus. :-)

Hi Clark! Yes it is; I suppose I'm "romanticizing" it. But I do love the "night music" it creates. I have some videos on a site I created several years back, with a great example of this chorus and "breeding"...take a look at the "Spring Wetland Chorus" at this link-